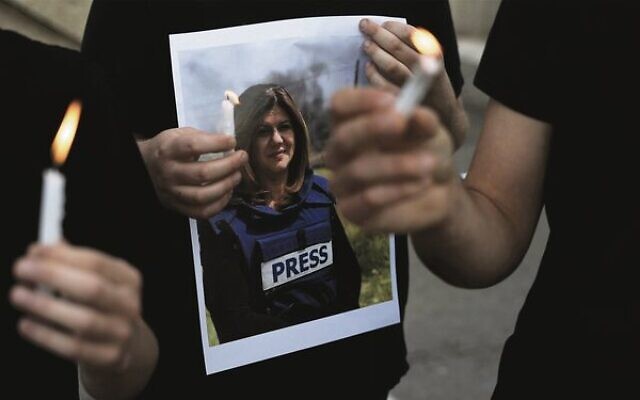 Protesters hold candles and a photo of journalist Shireen Abu Akleh, who was killed while covering clashes between IDF troops and Palestinian gunmen in Jenin on May 11. Photo: AP Photo/Ariel Schalit

CNN said on Tuesday it had conducted its own inquiry into the death of Al Jazeera journalist Shireen Abu Akleh, saying the results suggested she was deliberately targeted by Israeli forces.

The IDF said the allegation was “entirely unfounded”.

Abu Akleh was shot dead while covering clashes between soldiers and Palestinian gunmen during an IDF operation in Jenin on May 11. The IDF has not ruled out that she was accidentally killed by Israeli fire, but says Palestinian gunmen may also be at fault. It has said it can make no determination while Palestinians refuse to hand over the bullet that killed her for forensic examination.

In an item headlined, “‘They were shooting directly at the journalists’: New evidence suggests Shireen Abu Akleh was killed in targeted attack by Israeli forces”, the network said it had conferred with experts to support the claim.

First, using audio from a video of the moment the journalist was killed, the network said forensic audio experts had identified that the shots came from about 200 metres away – the alleged distance between Abu Akleh and nearby IDF forces at the time of her shooting.

Second, it cited Chris Cobb-Smith, a security consultant and British army veteran the network identified as a firearms expert. Cobb-Smith looked at photos of bullet markings left on a tree just where Abu Akleh was hit, and said that they were indicative of controlled, targeted shots rather than stray bullets.

“The number of strike marks on the tree where Shireen was standing proves this wasn’t a random shot, she was targeted,” he said, while noting that evidence of Palestinian fire during the exchanges showed “random sprays”.

He added that at a distance of 200 metres, there was “no chance” random fire would leave such tightly knit marks.

“From the strike marks on the tree, it appears that the shots, one of which hit Shireen, came from down the street from the direction of the IDF troops. The relatively tight grouping of the rounds indicate[s] Shireen was intentionally targeted with aimed shots and not the victim of random or stray fire.”

The Israel Defence Forces has said that any deadly Israeli fire would have been accidental. An unnamed senior Israeli security official told CNN, “In no way would the IDF ever target a civilian, especially a member of the press.”

In a statement later on Tuesday on the CNN report, the IDF said it had been thoroughly investigating the incident since it occurred and that its interim findings had been unable to definitively determine the origin of the fatal shot; it reiterated that an examination of the bullet would likely enable a firm determination, but that the Palestinian Authority has refused to make the bullet available. “The claim that the gunfire was aimed [at Abu Akleh] is entirely unfounded,” it said.

Meanwhile, almost two weeks after the death of the veteran Palestinian-American reporter, the Associated Press said on Tuesday that a reconstruction it carried out lends support to assertions from both Palestinian authorities and Abu Akleh’s colleagues that the bullet that cut her down came from an Israeli gun.

It did not, however, accuse Israel of intentionally targeting her. It also stressed that its findings were indefinite.

Any conclusive answer is likely to prove elusive because of the severe distrust between the two sides, each of which is in sole possession of potentially crucial evidence.

According to AP, multiple videos and photos taken on the morning of May 11 show an Israeli convoy parked just up a narrow road from Abu Akleh, with a clear line of sight. They show the reporters and other bystanders in real time taking cover from bullets fired from the direction of the convoy.

It said the only confirmed presence of Palestinian gunmen was on the other side of the convoy, some 300 metres away, mostly separated from Abu Akleh by buildings and walls. Israel says at least one gunman was between the convoy and the journalists, but Palestinian witnesses say there were no gunmen in the area and no gunfire until the barrage that struck Abu Akleh and wounded another reporter.

The Palestinians have refused to hand over the bullet or cooperate with Israel in any way on the investigation, but say they will share the results of their own probe with any other party.

Palestinian Authority Foreign Minister Riyad al-Maliki said on Monday that the PA has referred the shooting to the International Criminal Court’s prosecutor’s office.