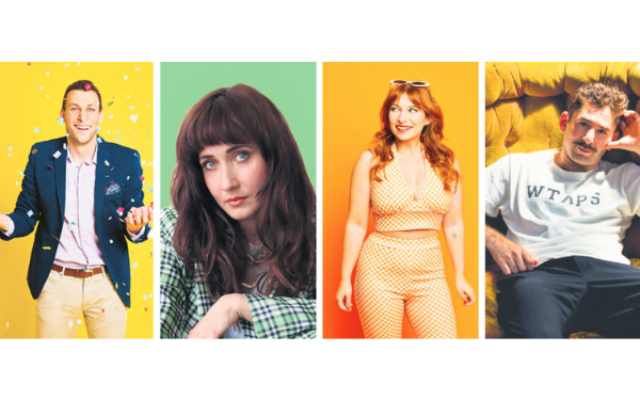 Jewish comedian Michael Shafar is excited to be bringing his new show to the SCF.

“This year’s show is all about solving the world’s most pressing problems. I’ve worked out how to get everyone vaccinated, how to solve racism and antisemitism and how to fold a fitted sheet,” Shafar told The AJN.

For Shafar, he’s most excited to perform his act for the community. Speaking to The AJN during the Adelaide Fringe Festival he said his jokes there were falling a bit flat.

“There are zero Jewish people here and none of my references are making any sense to them. I feel like an absolute schmuck here, and that’s a reference they don’t understand either,” he said.

Smiedt, who has opened for Joan Rivers, Mark Watson and Martin Short, has performed all over the world, delighting audiences with his warm, inclusive comedy.

Reynolds and Fuchs both have their own shows as part of the SCF as well.

Sydney-based comedian and currently part of the team at The Hundred with Andy Lee, Mike Goldstein is also headed back to the SCF stage with Still Got It.

Goldstein is a staple of the Australian stand-up scene and he’s fully prepared to answer slurs and slights such as ‘he’s no Hamish’ and ‘why is this American on our television?’

Described as “musical comedy perfection”, Jude Perl will be performing with a full band on stage, presenting her show Participation Award – The Album Tour. Perl asks the age-old question, ‘why does school suck so much’ and explores some possible reasons – perhaps it’s the compulsory sport events, the grading methods, the volatile social food chain or a myriad of other reasons. The show promises to be high energy, awkward and above all else, entertaining.

Josh Glanc describes his show, Vroom Vroom, as surprising, saying “you never quite know what’s around the corner,” so it’s sure to be exciting for audiences.

There’s also a lot of original music in this year’s show which is a break from Glanc’s usual material. He covers rejection, themes on going against the grain and whether you’re good enough.

Glanc says that perhaps it stems from giving up his legal career, and compromising on salary, to become a comedian.

“Had I not been brought up in Caulfield and gone to a Jewish school, I might not have that complex,” he said, referring to the ‘Jewishness’ of his act, even though it’s not overtly Jewish.

Glanc, who’s very much looking forward to being back on stage after what he calls “an incredibly difficult time for performers with huge feelings of career stagnation and purposelessness,” said he’s looking forward to the barrage of shows he’s about to present at SCF.

Thalia-Joan, who was raised in both Israel and Australia, was always known as the “bright and funny kid” at school. But she never believed she could make people laugh for a living until she met Dr Bruce Carter, principal of Emanuel School when she was a student there, who encouraged her to try out for Newtown Performing Arts. For Thalia-Joan, performing at SCF means she’ll have more people she knows in the crowd to poke fun at.

“Performing at home base always feels a bit more exciting when you know you can play with the crowd a bit more by create a more tailored show that will make it more relatable,” she told The AJN.

Thalia-Joan will be performing Ex-pectations which is described as “a break up story like no other”, as the comedian breaks up with society and its outdated expectations and limitations.

“It starts with an interesting observation that then spirals into a newfound obsession, revealed at the beginning of the show and then slowly unpacked throughout,” she explained.

“Essentially any expectations you have for the show should be left at home because it’s sure to end up being something totally different, as always.”

Covering a broad range of comedic topics, each and every artist simply wants to entertain, viewing each opportunity as an honour. As Thalia-Joan said, “There is nothing better than making someone laugh.”

Sydney Comedy Festival runs until May 22. For tickets: sydneycomedyfest.com.au