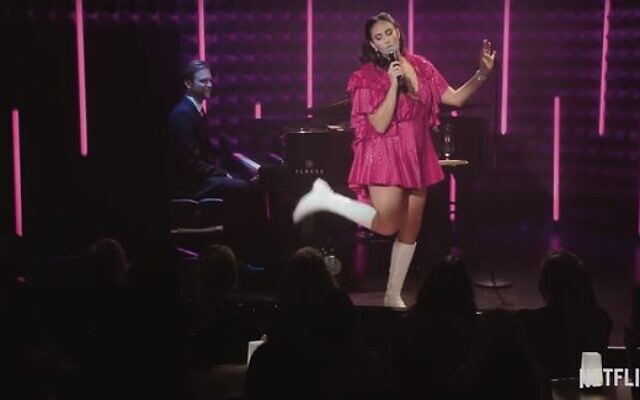 “I FEEL completely insane, but I look literally stunning,” muses Catherine Cohen at the start of her new Netflix special, The Twist…? She’s Gorgeous – before gleefully going on to poke fun at our ideas of both beauty and insanity, in stand-up and in song.

Cohen, who is the daughter of a Catholic mother and Jewish father, was a musical theatre student since childhood and a Princeton English major, who finally got a real education after studying stand-up and sketch comedy at the Upright Citizens Brigade Theatre.

She previously played comic roles such as Sheila the Siren in What We Do In The Shadows, the mockumentary series based on the movie by self-described “Polynesian Jew”-ish director Taika Waititi.

In the special, she riffs on topics from blenders to rom-coms, each triggering their own preoccupations. “I just feel like it’s every chubby girl’s nightmare … to be carried in a playful way.”

Though she admits “I do suffer from depression, or as I like to call it, crying because outside smells like the past” – Cohen has a way of finding joy in unlikely places.

Speaking about pandemic confinement, she says, “The beauty of social media is you can watch people you know sort of unravel in real time.”