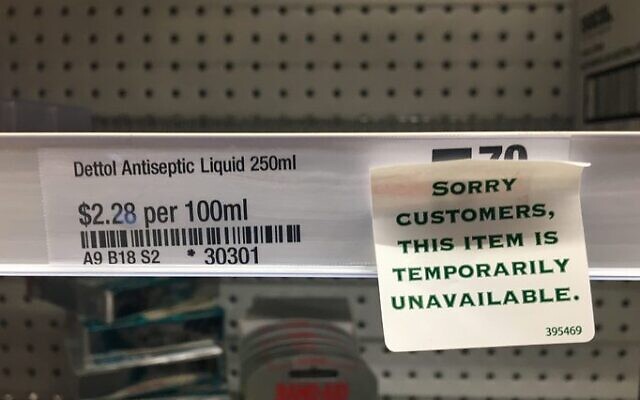 THE “Big C” conjures up so many fears and strong emotions – it refers to cancer. But of late we have another “C” word to add to our fearful lexicon and it is coronavirus.

There is widespread fear across the world, huge media coverage, paranoia, conspiracy theories, racist attacks and deep economic anxiety. It has been pointed out that as with terrorist attacks, epidemics generate widespread uncertainty and the tendency to panic.

Fear is inbuilt in our brains and I’m a sucker for it. I’ve read countless articles, I follow every news report on the developing contagion, check out whether masks are available … I’m even thinking of the best quarantine room at home and whether we need to stock up on tuna and schnitzels!

I know that it’s my amygdala speaking and that’s a very primitive part of the brain. So, it’s time to take a deep breath, consider the facts, draw on my inner strength, listen to the more considered opinions of our scientists and hear the wise and tested voices of our Jewish tradition. And that is what I want to share with you.

First, let’s face the fear and recognise that with infectious diseases we have a “strong tendency to overreact emotionally and underreact behaviourally” because by nature we are primed to fear these diseases just as we are evolutionarily primed to be scared of snakes and spiders. This explains why we’re so jumpy today when someone sneezes in a crowded space. I couldn’t help seeing the irony as we studied the Daf Yomi this week that if a person sneezes while praying it’s a good sign because sneezing makes one feel better and is an indication that one’s prayer has been accepted: “Just as he is given satisfaction below so he’s given satisfaction above” (Brachot 55a and 24b). Today we would react – “It may make you feel better, it makes me feel worse!”

On the other hand there’s the recognition in the Midrash that sneezing could be indicative of a dangerous condition.

“From the day that heaven and earth were created, no one was ever sick; if a man was on the road or in the marketplace he would sneeze and his soul would leave by way of his nostrils … Until Jacob prayed to God about this.”

To be sure, the coronavirus is dangerous and people are dying from it. It is spreading at an alarming rate and we do not yet understand it fully or have a vaccine for it. Yet we also know its mortality rate is relatively low – its current lethality is two per cent and some say this is likely an overestimate. From my reading nobody is saying that the effects of this virus will be anything like the awful 1918 influenza pandemic.

However, it’s important we don’t downplay or underestimate the costs – physical, social, financial and emotional of this epidemic. It also looks like we shouldn’t deny that it is likely to disrupt our lives for a while yet to come.

Notwithstanding this, we need to recognise that the fear of the virus and the panic it can elicit could be more damaging than the virus itself; as it’s been said, the pandemic of fear may well be worse than the fear of a pandemic. It was FDR in his inauguration speech who spelt this out most memorably: “So, first of all, let me assert my firm belief that the only thing we have to fear is fear itself – nameless, unreasoning, unjustified terror which paralyses needed efforts to convert retreat into advance …”

Recently Singaporean PM Lee Hsien Loong put this sentiment into a contemporary context when addressing his people: “Fear and anxiety are natural human reactions. We all want to protect ourselves and our families from what is still a new and unknown disease.

But fear can do more harm than the virus itself. It can make us panic, or do things which make matters worse, like circulating rumours online, hoarding face masks, or food, or blaming particular groups for the outbreak.”

When reading Lee’s calm, measured and thoughtful words and his sensible suggestions on how to face the fear, I thought of the tiny tefillah in our siddurim that follows the Alenu prayer. It’s called “Al Tirah” and it begins with the provocative: “Have no fear of sudden fear” and ends with the evocative: “I made you, I will bear you, I will carry you and I will rescue you.”

It’s a combination of some three verses from Proverbs and Isaiah. It’s a call for courage and faith in the face of fear. Fascinatingly it has a link to the Jewish month of Adar we’ve just started; Adar is the Purim month, with its terror and its triumph.

These verses first appeared together in the Midrash Esther Rabbah (7:17) where it relates that soon after Haman’s genocidal decree against the Jews of Persia was issued, Mordechai bumped into three young children on their way home from school. He asks them what verses they had learnt at school that day and they reply by quoting the three verses that now make up the “Al Tirah” prayer.

When Mordechai hears this he is overjoyed as he sees it as a sign that the decree would not be fulfilled. This prayer subsequently took hold of the Jewish imagination as a source or “segulah” of hope for the future and that fear can be overcome.

I take strength from this tefillah and from the calm cerebral scientists. They speak to my higher cortical centre which is the part of my brain which engages in thoughtful deliberation. I will not be panicked by the selective spread of highly sensationalist content being spread by social media and some media outlets.

Professor Karin Wahl-Jorgensen, of Cardiff University has been studying the role of emotions in journalism for the past 10 years.

She writes that the current outbreak has had far more prominent coverage than other outbreaks like Ebola. In major international English newspapers, over a thousand articles mention “fear” or related words; they often call it the “killer virus” or “deadly disease”. She writes succinctly that the coverage of the outbreak is more a reflection of public fear than information about what’s actually happening.

Warren Buffett’s response to the coronavirus is also highly instructive. He is quoted as saying, “We’re buying businesses to own for 20-30 years. My 20-year outlook is not changed by the coronavirus”. Buffett is acting according to the Jewish definition of wisdom – being able to see beyond the present moment and look far into the future. The long view has always characterised Jewish life and thought.

PM Lee’s advice is transparent, direct, practical and composed and is an example of the kind of leadership we need today.

He cautions that “we are not locking down the city … We have ample supplies so there’s no need to stock up with instant noodles, tinned food or toilet paper…” He reminds people that the fatality rate is low. He readies his people for possible outcomes suggesting that those with mild symptoms for example may be encouraged to see their family GP first: “I am sharing these possibilities with you, so that we are all mentally prepared for what may come.”

Among the most significant things Lee says is: “We can each do our part… We should take courage and see through this stressful time together … Take sensible precautions (like washing hands) help one another, stay calm and carry on with our lives”.

So the message in the face of this “C” crisis is clear and “C” based: Calm, Courage, Confidence, Caring, Communicating with Clarity, being Cerebral. In the spirit of Adar let’s Cerebrate and Celebrate as this too will pass, and it will be a lot easier if we face it together. And one more (sort of) C: Chazak Ve Ematz. Be Strong, Be Brave!