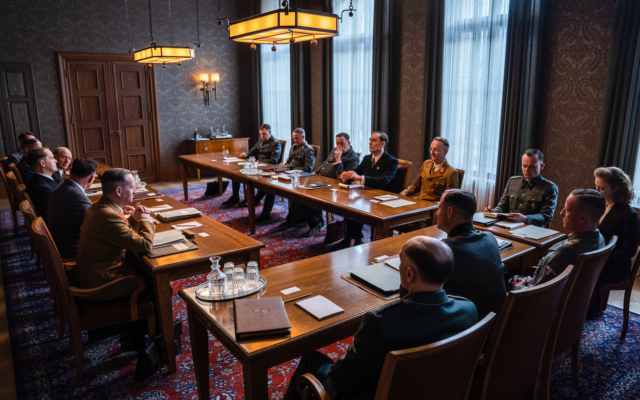 It was an idyllic villa that became synonymous with one of the most horrific decisions made in history. On January 20, 1942, Reinhard Heydrich invited high-ranking representatives of the German Nazi regime to a “meeting followed by breakfast” on the lakefront of the Great Wannsee in southwest Berlin. The sole topic on the agenda was what the Nationalist Socialists called the “Final Solution to the Jewish Question”.

What came from the meeting was the decision to systematically murder millions of Jews across Europe. The meeting is remembered as one of the most terrible conferences of human history.

The Conference, also known as Die Wannseekonferenz, was shot on location at Wannsee Lake in Berlin and produced for the 80-year commemoration of the meeting. While there have been some movies and television series made about the Wannsee Conference, questions have always arisen, purely because little is known about the actual event. The information writers, directors and producers can take inspiration from is the only surviving copy of the conference protocol, which was authored by Adolf Eichmann and Heydrich.

According to reviews, what The Conference gets right is the portrayal of the people involved themselves. With no historical data, it’s difficult to know what actually went on in the room, including how people behaved and what they talked about, apart from of course, what is on the “official” record. This means a lot has been dramatised in the past.

However, The Conference shows the leading Nazis as humans, making a decision, based on an extreme ideology, about the fate of millions. There is no over-dramatisation, no painting the picture darker than it was already – simply letting the situation speak for itself.

The Conference will be screening throughout Australia.