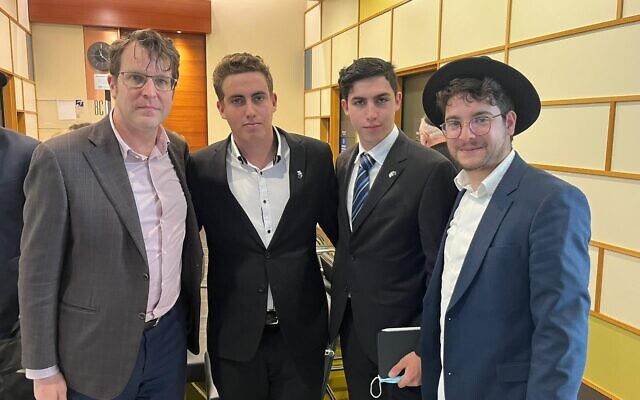 THE Jewish Community Council of Victoria (JCCV) has thrown its moral support behind a group of Jewish ex-students who are suing Brighton Secondary College and Victoria’s Education Department in the Federal Court for alleged antisemitic bullying and the school’s alleged failure to protect them.

While stating that “the outcome is a matter for the court, and the JCCV trusts in the Australian judicial system”, it added, “But regardless, the community says ‘never again’. Antisemitism is abhorrent and should be stamped out wherever it occurs.”

JCCV president Daniel Aghion, a King’s Counsel, visited the court on Monday, one of a number of Jewish communal figures who have attended in solidarity with the former students. He said afterwards, “I attended court to listen to the evidence and to show the Victorian Jewish community’s support for the students. The family have requested, if you are able to do so, to attend court and show your support.”

The JCCV has run a training program for staff at Brighton Secondary College to help them understand, identify and respond to antisemitism. The program was delivered in partnership with Courage to Care, the ARK Centre and the Jewish Museum of Australia.

Deputy Liberal leader and Caulfield MP David Southwick, who visited the court, stated, “When all is said and done, the outcome is a matter for the court … at the end of the day, our schools must be safe. Hate has no place in our great state.”

Matt Kaplan, his brother Joel, Liam Arnold-Levy, Guy Cohen and Zack Snelling are suing the school for negligence, and failing to protect them as Jewish students under federal racial discrimination laws and the UN Convention on the Rights of the Child.

Earlier in the hearing, Brighton Secondary College principal Richard Minack had told the court he had not apologised to Arnold-Levy after the student reported a knife being held to his throat in a school bathroom, but knowing what he knew now, “it would have been appropriate for me to apologise”.

The court has been told more than 100 swastikas had been daubed on lockers, bathrooms, fences and books, yet no student got into trouble over the swastikas.

Kaplan has given evidence he was frequently confronted with antisemitism and bullying, was made to feel unsafe by Minack’s reference to his father’s wartime role in the German military, and when he reported incidents to staff, was told to limit himself to the reported incident and not make wider comments about antisemitism which he had experienced at the school.