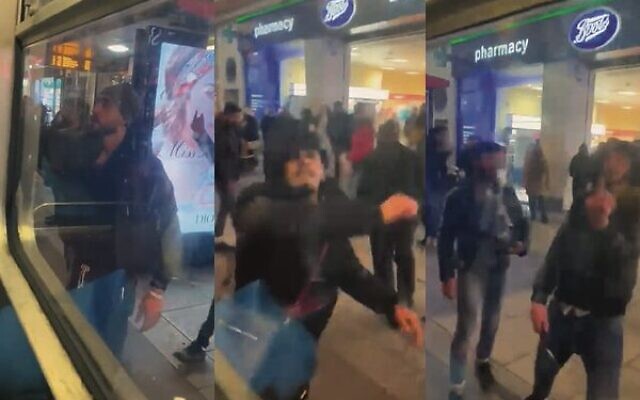 Images of the group attacking the bus in London.Photo: UK JEWISH NEWS

The UK Jewish community is in a standoff with the BBC over its report on an antisemitic attack on a bus in central London earlier this month on which youngsters were celebrating Chanukah.

A line in the broadcaster’s initial coverage of the incident – in which a group of around six males made Nazi salutes, spat and shouted abuse at the kids – said “anti-Muslim slurs” could be heard coming from within the bus.

When challenged, the BBC amended the line to read, “A slur about Muslims can also be heard from inside the bus.”

No other media published any such claims.

However, investigation of the audio appeared to reveal one of those on board saying, “Tikra lemishehu, ze dachuf” (“Call someone, it’s urgent”) rather than a slur.

Calling on the BBC to issue an apology to victims and clarify where it obtained the information, the Board of Deputies of British Jews said, “The BBC thought that they heard a slur in English. What they were actually hearing was a distressed Jewish man speaking in Hebrew appealing for help.”

When approached for comment, a spokesperson for the broadcaster doubled down saying, “one such slur can be heard clearly”.

The showdown took another turn last week when it was claimed the allegation about the anti-Muslim slur in the BBC story was added after the report was filed.

The UK Jewish News understands the journalist submitted the original article without any mention of an alleged anti-Muslim insult.

There was further outrage over the BBC describing the attack on the bus as “alleged” antisemitism.

Shneor Glitsenstein, director of the Chabad Israeli Centre Golders Green, who was on board the bus, said, “Let me be clear … we were attacked on the streets of London for being Jewish and celebrating Chanukah. While our bus contained no references to Israel, we were clearly a Jewish group.”

The Board of Deputies noted that footage of the incident “clearly shows a group of men making Hitler salutes, spitting, attempting to smash windows, chasing and threatening a bus-load of Jewish children”.

“By reducing the obvious antisemitic incident to a mere ‘allegation’, your report has the effect of casting doubt on the attackers’ antisemitic motivations.”

The Board went on to ask, “Does the BBC reporting team believe making Nazi salutes at Jewish children could have any other interpretation?”

Police are treating the attack on the bus as a hate incident.