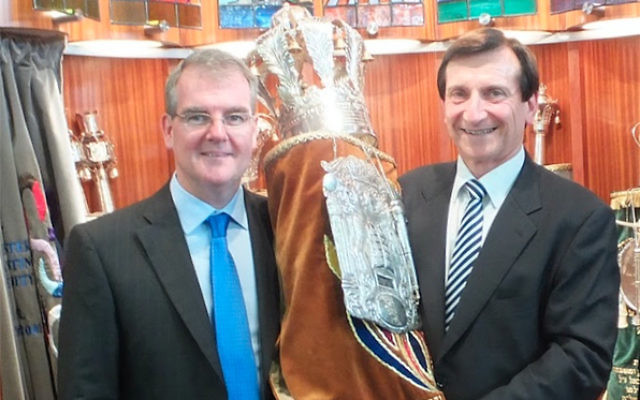 THE NSW Jewish Board of Deputies (JBOD) has congratulated state Opposition Leader Michael Daley on his new role.

The former corporate lawyer, who has represented the electorate of Maroubra since 2005, was elected NSW Labor leader on Saturday after the resignation of Luke Foley, who resigned last week amid accusations he ­inappropriately touched an ABC journalist.

JBOD president Lesli Berger said the NSW Jewish community “has had a positive and productive relationship” with Daley both in his capacity as a local member and during his tenures as police minister and shadow police minister.

“He has been sympathetic to major Jewish institutions in his electorate such as Maroubra Synagogue and Mount Sinai College, especially in regards to security and has spoken out against antisemitism in Parliament,” Berger said.

“We look forward to working with Mr Daley and wish him best of luck in the new position.”

As Member for Maroubra, in 2014 Daley helped secure $48,000 for an upgrade of Maroubra Synagogue’s kitchen and last year oversaw a $20,000 grant to Mount Sinai College to upgrade its recreational areas.

He joined Maroubra Synagogue’s 70th anniversary celebrations in August along with Heffron MP Ron Hoenig, who is a member of the shule, and Labor frontbencher and NSW Parliamentary Friends of Israel deputy chair Walt Secord.

Rabbi Yossi Friedman – who is spiritual leader of both the synagogue and the college – said Daley is a “true friend of our community” and his assistance with the various grants had helped to facilitate its growth.

“He is well known to all and it could be said he has become somewhat of a ‘regular’ at our communal events,” he said. “We wish him ‘mazal tov’ and much success in his new leadership position.”

Secord said he looked forward to working with both Daley and Sharpe, who are “deeply committed to fighting racism and intolerance and working with the various community groups to build a tolerant and cohesive society”.

The Upper House MP also paid tribute to Sharpe, who he called “a champion in the fight against discrimination in our community”.

“She is a trailblazer,” he said, adding that she had attended services at the Great Synagogue and spoken at JBOD’s boardroom lunch speaker series.