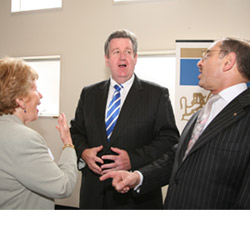 THE pivotal role played by Australia — and one Australian in particular — in the establishment of the State of Israel was celebrated at a gala event in Sydney on November 29.

The Tribute to Doc Evatt dinner, hosted by the Executive Council of Australian Jewry (ECAJ), the National Council of Jewish Women of Australia (NCJWA) and the Zionist Federation of Australia, was held on the 62nd anniversary of the United Nations (UN) General Assembly’s adoption of the partition resolution that led to the creation of the Jewish homeland.

Chairman of the Ad-Hoc Committee on Palestine, Dr H V Evatt was responsible for steering the proposal through. As president of the assembly in May 1949, he also presided over the historic vote that saw Israel admitted to the UN.

Hailing Evatt as “a shining example of the power of the human spirit, the strength of the will and a commitment to justice that all people should aspire to”, Ambassador Rotem quoted the Doc’s private secretary, who wrote: “The tiny republic, which embodies the age-old dreams of world Jewry and Zionism, was born in 1948 with this man as midwife.”

The sentiment was echoed by McClelland, who also spoke of Australia’s continued commitment to Israel, as well as his own role in addressing communal concerns over security and laws relating to incitement of violence on the basis of race and religion, and the online dissemination of race-hate material.

Mrs Carrodus, who was actually in the General Assembly on the occasion of the May 1949 vote, recalled the historic event. She told The AJN: “My mother and I cried, it was so emotional.”

Reflecting on the tribute dinner to her father, she added: “The other night was magical. I was so moved. Everyone loved him and had such high regard for him.”

Expressing her delight with the evening, NCJWA president Dalia Sinclair said: “It was one of my dreams to hold this event.”

She added: “I’d like to see November 29 integrated into the education system and to make people more aware of its importance. Every day we have to justify why Israel is there, but we shouldn’t have to because we have been given this legitimate right to exist.”