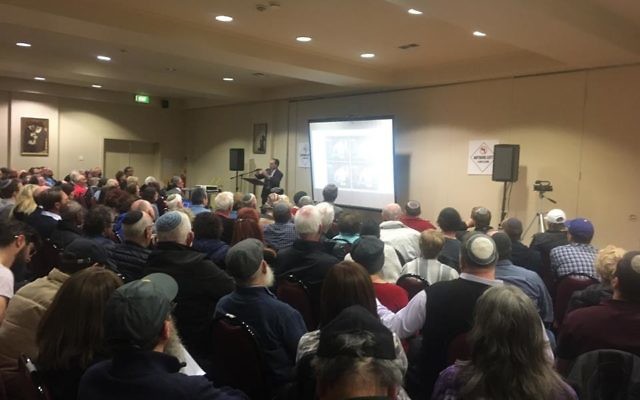 THE controversial launch of the Australian Jewish Association (AJA) was held at South Caulfield Synagogue on Sunday night (September 10), after Mizrachi in Melbourne withdrew its offer to host the event.

Only hours before Shabbat, Mizrachi president Danny Lamm cancelled the event, originally titled The Threat of Islam to Jews but subsequently changed to Islam and the Jews – Lessons for Australia.

The launch had already been cancelled by Beth Weizmann which had originally been booked to host it.

The AJN has learned that last Thursday night Leibler Yavneh College president Avi Gilboa became aware of the event and asked Lamm to cancel it.

On Friday, with the launch still due to go ahead, another Yavneh board member contacted the Community Security Group (CSG) to clarify if the event would increase the risk of a terrorist attack.

When CSG stated that it would increase the risk to Mizrachi, and to the students of Yavneh’s kindergarten and creche on the site, in the near future, Lamm agreed to the cancellation.

Gilboa, who told The AJN that he did receive some calls of concern from parents, said “the Yavneh board was not supportive of drawing unnecessary attention or controversy to our co-located campus”.

However AJA president David Adler said the basis for the concern by Mizrachi was absolutely irrational.

“Part of the subject was to expose those who incite violence, not to do it ourselves,” he said.

“We chose it as a subject because it is not being discussed by other organisations in the community.”

After Shabbat the AJA contacted South Caulfield Hebrew Congregation and was able to secure it as a venue.

South Caulfield treasurer David Boyar said the organisation is “rebuilding itself” and is open to the entire community.

“There were two protesters out the front and so I went to them both and invited them inside to hear the content as long as they could be respectful of the speaker,” Boyar told The AJN.

“One of them started abusing me and the other declined because he didn’t agree with the content.”

The event was attended by more than 200 people.

Several people in attendance told The AJN that the content of the presentation did not live up to the hype.

Adler said the AJA was founded because some members of the community believe the current Australian Jewish leadership has shifted away from genuine Torah values.

“Some holding conservative views on social and political issues and/or holding Jewish Orthodox values do not consider they are adequately represented and feel disenfranchised.”

He said the AJA will focus on free speech and Jewish values, Israel advocacy with an emphasis on Jewish identity and religious connection to Israel and a discussion on radical Islam in the community, particularly in the light of European experiences.

“AJA does not purport to represent the whole community and does not have any desire to do so.

“AJA has already received encouragement from many conservative politicians, media commentators and think tanks both here and in Israel.”

The AJN can reveal that NSW Kashrut Authority president Baron Revelman and Sydney security consultant Daniel Lewkovitz are members of the AJA, even though their names were not made public.

The AJA lists several members on its website but noted that some “do not wish to be identified publicly at this stage”.

The AJN can also confirm that Jaron Chester, a businessman recently charged with allegedly laundering money for an international drug and tobacco syndicate, was also involved until he tendered his resignation in June.

And Avi Yemini, an outspoken gym owner, was involved too, until he tendered his resignation last week.

“So too, Mr Chester was never a director, office bearer or spokesman for AJA.”

Adler claims that Yemini and Chester attended meetings before the AJA was formally established, but by Adler’s own admission the organisation was founded in May and Chester only resigned in June.

“The meeting occurred well before recent allegations against him were raised in the general press,” Adler said, referring to Chester.

Yemini, meanwhile, claims he was a founder of the AJA and resigned after his name and picture were pulled from its website, accusing the board of “cowardice”.

In a resignation letter last week, he wrote, “I am resigning from the board as I have lost faith in it.”

He added, “I do it with a heavy heart as I do believe in the mission statement. In fact, the entire organisation was my idea.”