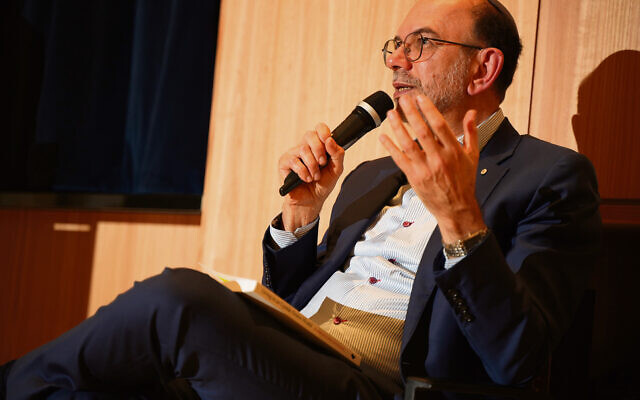 Rabbi Ralph Genende sees his role as a community rabbi to “comfort the afflicted and afflict the comfortable”, and the essays in his new book deliver on that score. They also reveal a widely travelled man with a sensitive eye and a love of poetry. As a Modern Orthodox rabbi, known to readers of The Australian Jewish News, Rabbi Genende has always expressed his social justice concerns openly. He attributes this to his youth in South Africa, where walking through the gates of a fort that held prisoners of apartheid immediately connected to his Jewish “past”, remembering Egypt, Rome and Auschwitz.

Rabbi Genende’s passion for social justice, including “making space for women”, has not always been appreciated. He faced a storm in Melbourne when, as rabbi of the small shule Beit Aharon, he allowed the passing of the Sefer Torah to women and encouraged bat mitzvah girls to give a dvar Torah. In this and other issues, such as the treatment of LBGTIQA Jews and the conversion of non-Jewish spouses, Rabbi Genende argues for a more welcoming Orthodoxy, recalling that Abraham’s tent was “open on all sides”.

Describing himself as a centrist and one who “would rather err on the side of compassion than be a religious warrior” Rabbi Genende leaves it “to God to judge who is right”. Led by the Shema, which commands one to love God, Rabbi Genende prefers to see the Jewish people as held “together by love” rather than exclusively by halachah. Extending this love to neighbour and to stranger, it also inspires his interfaith work, which following Ben Zoma (Avot 4:1) accepts that the wise person is “One who learns from all.”

With the best of intentions, however, the results are not always wholly pleasant. On an interfaith journey to Israel with Christian and Muslim participants, Rabbi Genende was assailed by accusations of “apartheid” and attacked by a Lebanese woman who alleged that Yad Vashem was used to justify the existence of Israel. He took solace from the resident Sufi Imam in Jerusalem (now passed away), whose humble and open heart touched all those who knew him.

Yet, the consistent and increasing attacks on Israel and Jews is a burden that Rabbi Genende does not take lying down. He quotes the Amidah prayer as the watchword for antisemites: “For slanderers let there be no hope.”. And in his essay on the Israel-Gaza War of 2021, he defends Israel’s actions against Hamas’ indiscriminate targeting of civilians and negligence of its own people’s safety. He concludes: “I say strong is not wrong”, to which the University of Melbourne philosopher, Raimond Gaita, was presumably referring when he wrote in the foreword that Rabbi Ralph Genende “is a good man” but on Israel he “disagrees seriously”.

So far, these are the standard issues that afflict the Jewish community, not least Gaita’s reproof, but Rabbi Genende also addresses a range of contemporary topics with his characteristic critique, compassion and doses of poetry. On Facebook, he is optimistic about its potential to reform the world, but cautions, quoting the American poet Ralph Waldo Emerson: “Our friendships hurry to short and poor conclusions because we have made them a texture of wine and dreams, instead of the tough fibre of the human heart.” He turns to the biblical David and Jonathan as an example of the “tough fibre” of friendship.

Of all the issues in the book, Jewish identity seems to be the most troublesome for Modern Orthodoxy. Rabbi Genende admits it is infuriatingly difficult to define – and rightly so. In our thirst for verisimilitude and definiteness, we have a tendency to write out many Jews because they do not fit our categories. If we were to spend as much energy on trying to bring Jews in as we do on trying to keep them out, we would be a richer, stronger community.

Although Rabbi Genende refers to Charedi and Chabad Judaism on several occasions he takes little notice of Reform or Masorti Judaism, which have resolved some of the issues that concern him. It signals to me that a mechitzah or wall of silence still separates the Orthodox from the Progressives in the Australian Jewish community, where fruitful discussion and cooperation would seem to be an obvious route to a stronger community.

On other matters of a more political nature, Rabbi Genende’s compassionate position is grounded in biblical and rabbinic narrative and consistent with a social justice perspective. But others might disagree, such as in his essay on “Black Lives Matter”, citing insufficient attention paid to the role of individual responsibility and cultural difference. Can the massively disproportionate crime rate among African Americans be explained simply as a consequence of white on black racism and poverty? Similarly, is the Uluru Statement of the Heart, as Rabbi Genende understands it, a “cry in search of a voice, a plea born out of despair”, or is it also a stark political move that will entrench a permanent constitutional division between Aboriginal people and the rest of Australians?

Politics aside, Living in an Upside Down World invites the reader to stop and reflect on the moral guidance and poetic riches of the Jewish tradition, including its annual cycle of festivals. It made me wish that more rabbis would offer to those outside their particular synagogue an opportunity to benefit from their knowledge, wisdom and experience as Rabbi Genende has so richly done for us.

Dr Rachael Kohn is an award-winning producer and broadcaster. She was presenter and executive producer of The Spirit of Things (1997-2018) and The Ark (2001-2006) on ABC Radio National.

Published by Retrospect. RRP $32.95. Available via https://shop.retrospect.agency.
Retail counter sales: Golds World of Judaica in Balaclava and Bondi, and The Avenue Bookstore, Elsternwick.