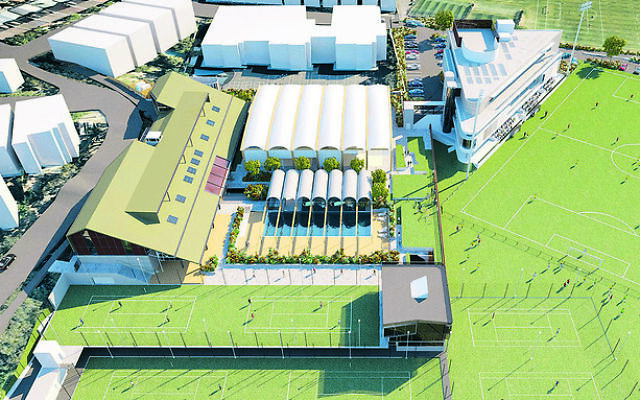 An artist's impression of the Hakoah Club site.

THE future of the Hakoah Club at White City will be determined within 45 days.

“We are at the pointy end of the business, but I believe we will get it over the line,” Hakoah Club president Steven Lowy told The AJN in an exclusive interview.

Plans have been submitted to council, communal consultation has taken place and a business model has been determined; all that is left now is the fundraising to build the facility.

If the fundraising events over the next three weeks, which start tonight (Thursday), are successful then construction should commence in late 2020 and that facility could open in 2023.

“This is a once-in-a-generation opportunity to make a transformational change.

“The lead and major donor families are expected to cover the bulk of the fundraising, and then various categories of memberships will be offered to the community in the first half of next year.”

The events come on the back of several years of work by the board, and six months of intense work since a new board took over earlier this year.

The Hakoah Club was founded in 1939 by Jewish immigrants and became a focal point for the Jewish community. In 2007 the club’s Hall Street property was sold for $19 million and three years later the 2.265-hectare site at White City was bought for $13.5 million.

For nearly a decade the board worked on a plan for the site, but they have upped the ante in recent months and are now close to going ahead with a build that is expected to cost upwards of $55 million.

Representatives from Hakoah have run several focus groups, conducted an online survey of 1500 people in the community, interviewed more than 20 communal leaders from a variety of organisation and visited, and learned from, similar Jewish community centres in America and Canada.

“We see Hakoah as the future hub of the Jewish community, and we have created a culture of engagement with community groups,” said Lowy.

“We are confident that the community wants this.”

He said some of those overseas models are self-sustainable, while others require donations.

Hakoah’s business model, established after learning from overseas models, is based on a combination of club membership, fitness membership and commercial income.

“We believe that Hakoah will be financially sustainable with a cashflow of $2.5 to $4 million, which will be used to fund communal programs and future capital and maintenance works.”

Lowy, who is also the president of the UIA World Board of Trustees, has seen the issues that Jewish communities around the world are dealing with.

He said this project is vital to the future of the community.

“When you look at the issues of Jewish identity, distance from Israel, intermarriage and less religion, this is a critical piece of the puzzle although in and of itself, it isn’t sufficient,” he said.

“The whole idea of this is so that other pieces of the communal puzzle can come together in one place.”

Lowy said the board is passionate about protecting and enhancing Jewish identity by creating a place that can create interactions that would not ordinarily occur.

“It is often said because of technology we are the most connected of any generation, but in a human sense we are probably the least connected and that is why we need physical places to interact and be proud of.”

Lowy said the new Hakoah will maintain the history of the club while creating new facilities for the future.

“That’s the balance, but if you build facilities flexible enough then you can adjust over time.

“The day this opens the community will realise how much they have missed this over the last 15 years.”