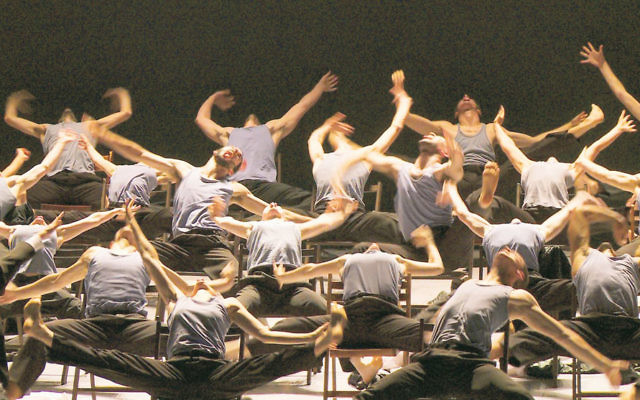 ISRAELI filmmaker Tomer Heymann threw himself into an eight-year project to make a documentary about Ohad Naharin, the acclaimed artistic director of the Batsheva Dance Company.

“I put all my heart into this project,” says Heymann, who was in Australia in June for the premiere of his documentary Mr Gaga.

The film, which offers a rare insight into Naharin, started screening in Israel last October and is still being shown in cinemas and festivals. It has been seen by more than 100,000 people there.

“It’s hard to explain, but it is now the most successful documentary ever screened in Israel, passing the 85,000 mark of The Gatekeepers,” he says, referring to the 2012 documentary featuring interviews with six former heads of Shin Bet, the Israeli secret service agency.

Mr Gaga, which has already opened in Italy, Germany, France and Britain, It’s Heymann’s second trip to Australia – he was last here in 2002 as a guest of the Melbourne Film Festival which screened his documentary, It Kinda Scares Me.

“At the time I was naive and at the beginning of my career, and didn’t know much about the movie business. I got a phone call inviting me to come to Melbourne for the festival,” he says.

“After the screening I was on my way to the airport when I got a call asking me to come back to the ceremony to receive an award for best documentary, so I have fond memories of Melbourne.”

Tomer and his brother Barak run Heymann Brothers Films, one of Israel’s leading film companies which has been making documentary films and series for more than a decade.

Tel Aviv about 25 years ago.

“My life would never be the same after seeing Ohad dance on stage,” recalls Heymann. “That was a moment in my life that I will not forget – he was the one who opened the door to the world of dance.

“My head and my heart experienced a giant upheaval, like a superb cocktail of alcohol and drugs, but without the alcohol and without the drugs! From that evening on, I became an obsessive consumer of Batsheva’s art of dance.”

Naharin was born in 1952 on Kibbutz Mizra and began his dance training with Batsheva in 1974. During his first year with the company, visiting choreographer Martha Graham singled out Naharin for his talent and invited him to join her own company in New York.

While working in New York, Naharin furthered his training at the Juilliard School and went on to perform internationally with Israel’s Bat-Dor Dance Company and Maurice Bejart’s Ballet du XXe Siecle in Brussels.

Naharin returned to New York in 1980 and formed the Ohad Naharin Dance Company, which performed in the US and abroad to great critical acclaim. In 1990 he was appointed artistic director of the Batsheva Dance Company and over the years he has choreographed numerous works, propelling the Israeli troupe onto the international stage.

Naharin’s contribution to dance has earned him many honours, including the prestigious Israel Prize for dance (2005), the EMET Prize for Arts and Culture (2009), and the Samuel H Scripps American Dance Festival award for lifetime achievement (2009).

He developed Gaga, an innovative movement language which emphasises the exploration of sensation and availability for movement. It has attracted a wide following among dancers around the world.

“Dance helps you connect to the power of imagination,” Naharin told The AJN in 2014 when he brought the Batsheva Dance Company to the Adelaide Festival.

“The choreography is not what moves me,” says Naharin. “It’s watching my dancers that really moves me and elevates the work. I developed this language (Gaga) which enables dancers to better their interpretation, not just of my work but their dancing in general.”

Naharin travelled to Australia with his partner Ari, a dancer with Batsheva, and their daughter Noga, now 7.

With 18 dancers in its senior dance troupe and 18 in the youth company, the Tel Aviv-based Batsheva  Dance Company presents more than 250 performances around the world each year.

For years Heymann tried to convince Naharin to agree to the documentary without success.

“Naharin is a tough nut to crack, very complex and a contradictory character, which makes him a fascinating subject for a documentary,” says Hetmann.

“It took me a long time to convince him to agree to bring my cameras into rehearsals – he was aghast at the idea that I wanted to come with my cameraman into his holy place.

“Ohad said, ‘This is my place of creation and I am afraid that you are going to  destroy it.’

“Finally he said, ‘Come tomorrow, otherwise you will not leave me alone.’”

“One reason that it took so long was that every few weeks I discovered more layers about Ohad, always finding more interesting material. All the time I was changing my script,” he says.

“I started the documentary as a person who loved his dance and was inspired by him, but over the years I discovered that I love him and became really close to him – that was a beautiful process.”

Naharin did not see the documentary until it was completed, when Heymann invited him to a special preview screening.

“He gave me gold in terms of boxes of material that I could use in the film, although often he did not know what the contents of the boxes were.”

After seeing the finished film, Naharin was moved to tears.

“He gave me a big hug and thanked me for making it,” says Heymann. “He said what was so amazing about the documentary was that he discovered new things about himself.

“I have put all my heart into this project and it is something that I didn’t know would take so long, but I am so proud of it.”

Mr Gaga is currently screening at Cinema Nova in Melbourne, New Farm cinema in Brisbane and the State Theatre in Hobart. Mr Gaga will screen at the Rozelle Cinema, Sydney from July 31.