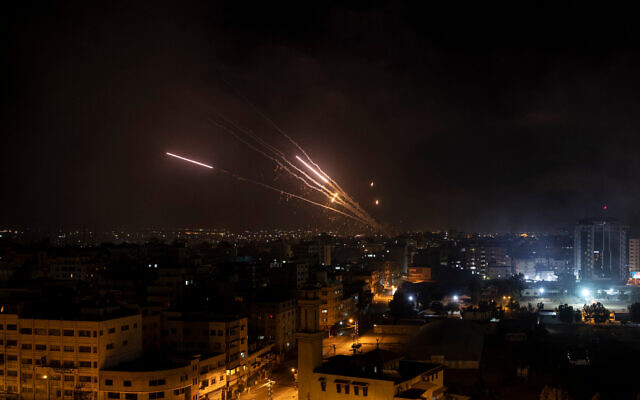 Rockets are launched from the Gaza Strip towards Israel on Wednesday, May 12, 2021. Photo: AP Photo/Khalil Hamra

ANOTHER Melbourne council has passed a resolution on the recent conflict with no mention of Hamas but a clear disdain for the actions of Israel and the IDF.

Independent Susan Rennie, the only council member to abstain from voting, told The AJN, “I was not comfortable being called on to pass judgement on a complex foreign affairs matter.

“I have been a lifelong champion for human rights but I don’t believe that the motion will achieve any meaningful outcome for our local community, or have any impact at all in Canberra or overseas,” she added.

While the motion states that the council “stands in solidarity with both the Palestinian and Israeli communities in the municipality”, a further line reads that council stands with the “Palestinian community who are calling for their basic human rights in the Occupied Territories to be respected in accordance with international law”.

Failing to mention any of the atrocities committed by Hamas, the motion also “condemns the threatened evictions of Palestinian families from East Jerusalem’s Sheikh Jarrah and the violence against worshippers at Al-Aqsa mosque during Ramadan”.

“We have a responsibility to speak out when we see injustice,” said seconder Susanne Newton, who labelled the motion as “balanced”.

Greco’s original motion, which was softened by councillors before the meeting, had also called on the federal government to urge Israel to “cease its occupation of Palestine and reverse the trend which points to Apartheid rule over Palestinians”, and to “recognise the State of Palestine”.

The AJN asked Greco numerous questions, to which he replied, “The motion passed by Council is self-explanatory as it adequately covers Council’s concerns.”

JCCV president Daniel Aghion said, “If the City of Darebin is sincere in its call for observance of human rights and for a just and lasting peace, then the warmongering behaviour of Hamas must be condemned.”

Anti-Defamation Commission chair Dvir Abramovich, who is calling on the council to apologise and to rescind the motion, added, “Quick to condemn Israel, the motion does not even contain a peep about the raining of rockets down on Israeli civilian centres by Hamas, a terrorist group committed to Israel’s destruction.”