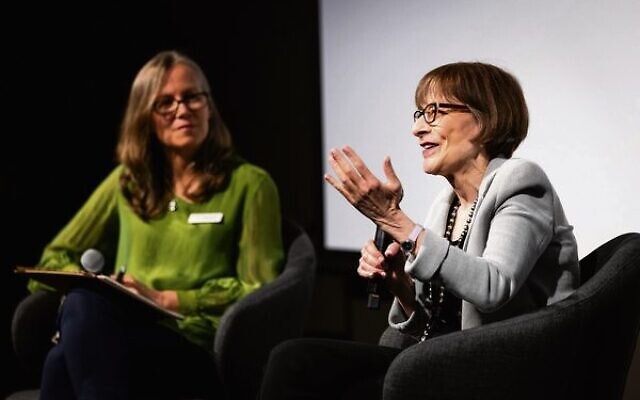 PERSISTENT assaults on democracy in Germany were harbingers of Kristallnacht (the Night of Broken Glass), the pogrom of November 9-10, 1938, widely seen as the first act of Nazi mass-violence that led to the Shoah, a US Holocaust educator has told a Melbourne commemoration.

Delivering the annual Betty and Shmuel Rosenkranz Oration – the first public event held in the new premises of the Melbourne Holocaust Museum (MHM) – Sara Bloomfield, director of the United States Holocaust Memorial Museum in Washington, DC, retraced the lies and antisemitic conspiracy theories that destabilised the Weimar Republic’s crumbling democracy and led to the rise of Nazi Germany.

On the Night of Broken Glass, 267 synagogues were smashed and burned, more than 7000 businesses were damaged or destroyed in Germany, Austria and parts of Czechoslovakia, and around 30,000 Jewish men were arrested and taken to concentration camps.

Bloomfield reflected, “It would be very reassuring to think that Nazism was just a sudden aberration. But it wasn’t a meteorite that fell one day from the sky. Nazism had deep roots in German and European history. And today, with the benefit of hindsight, we would call these deep roots warning signs.

“We all know social media is ideal for conspiracy theories, which are very much in the news. But history reminds us just how old they are. They’re a consistent thread throughout centuries of antisemitism,” she said, retracing theories that blamed Jews – from medieval blood libels, to the Protocols of the Elders of Zion, and in this century, theories blaming Jews for 9/11 and COVID-19. It was no coincidence, she noted, that Adolf Hitler’s first job in the Nazi Party was as head of propaganda.

“The 20th century began with the growth of mass-communications, a major war, revolution, a pandemic, and then a global economic crisis … Think about our own century,” said Bloomfield. “It began with a war … a severe recession, and an ongoing technological revolution that is so fast and so profound. It’s far exceeding our capacity to understand its societal and moral dimensions. And now we too have had a pandemic, and yet another war in Europe.”

Terri Lazarus, granddaughter of Shmuel and Betty Rosenkranz, said her grandfather’s horrific experience of Kristallnacht as a young man drove his determination to impart “tradition, education and a community focus” to his family.

MHM co-presidents Pauline Rockman and Sue Hampel paid tribute to the survivor guides and other volunteers whose tireless work they said has brought the MHM into its new era.