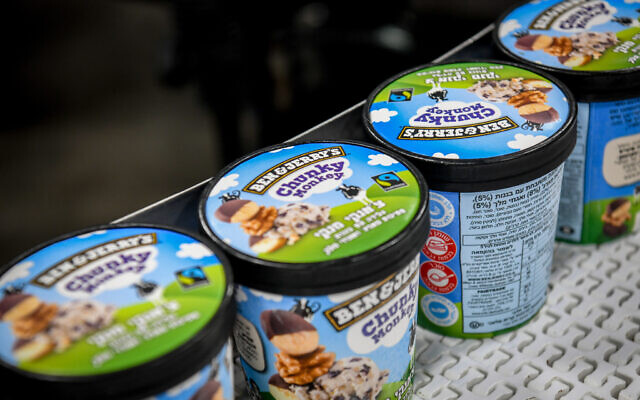 Ice cream containers at the Ben and Jerry's factory near Kiryat Malachi, on July 21, 2021. Photo: Flash90

The head of Unilever in Australia has written to the Zionist Federation of Australia (ZFA) to outline its new arrangements for Ben & Jerry’s in Israel after a deal was made for the ice cream to continue being sold in the West Bank.

The multinational has sold its Ben & Jerry’s business interests in Israel to businessman Avi Zinger’s American Quality Products (AQP), the Israeli manufacturer and distributor of the brand, who will now be independent. The move ends a year of legal battling since Ben & Jerry’s announced in July 2021 that it would stop selling ice cream in “Occupied Palestinian Territory”.

It will now continue to be sold in Israel and the West Bank. Israel and its supporters have hailed the decision as a major victory against the anti-Israel Boycott, Divestment and Sanctions (BDS) movement.

In his letter to ZFA president Jeremy Leibler and CEO Ginette Searle, Unilever CEO Alan Jope said  the company had used the past year “to listen to perspectives on this complex ad sensitive matter and believed this is the best outcome”.

“I would like to take this opportunity to reiterate how proud we are of our business in Israel, which remains an important market for us,” Jope said.

“We have nearly 2000 colleagues and four factories in the country and 85 per cent of the products we sell in Israel are manufactured there.

“We look forward to continuing to make a positive contribution to Israel’s economy and society for many decades to come.”

Jope continued, “I would also like to make it exceptionally clear that Unilever rejects completely and repudiates unequivocally, any form of discrimination or intolerance. Antisemitism has no place in any society. We have never expressed any support for the BDS movement and have no intention of changing that position.”

Leibler welcomed “this important decision by Unilever, which corrects the discriminatory move taken by its subsidiary Ben and Jerry’s”.

“It also represents a significant failure for the antisemitic BDS movement, which seeks to undermine any prospect of genuine Israeli-Palestinian peace. Despite public utterances of peace and justice, innumerable statements by BDS leaders and activists make clear the movement seeks Israel’s dissolution. BDS perpetuates the conflict,” he said.

Zionism Victoria president Yossi Goldfarb said, “The impact of this Cold War was felt on these shores with Ben & Jerry’s boycott prompting many kosher stores in Australia to stop selling their ice cream and local Jewish consumers to stop buying it.

“Unilever’s intervention is to be welcomed, as it not only means that our cousins in Israel can once again enjoy Chunky Monkey, but crucially it is a blow to the BDS movement that seeks to delegitimise the Jewish State.”

But Ben & Jerry’s said in response to the deal, “While our parent company has taken this decision, we do not agree with it.