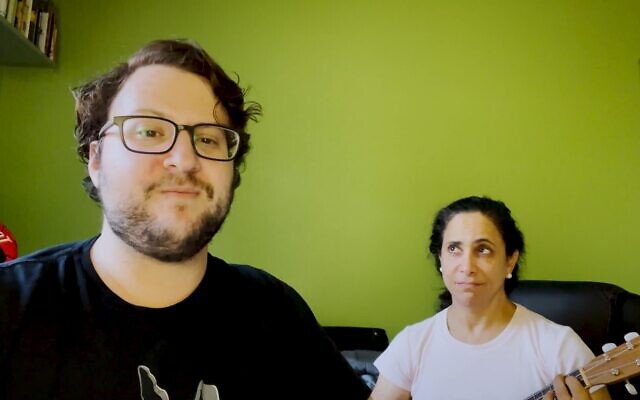 NEW YORK screenwriter Michal Schick became so annoyed hearing all the pandemic-related Holocaust comparisons that she decided to do something about it.

She scribbled down some lyrics and reached out to her friend Avishai Weinberger to ask if he knew anyone who played the ukulele.

“It’s a more fun way to process it than just to be screaming in your head all the time,” she said.

The result of their collaboration is The Anti-Vaxxer’s Lament, a two-minute song that pillories Holocaust comparisons in the COVID-19 era.

In a video posted earlier this month, Weinberger’s mother, children’s musician Naomi Weinberger, strums the tune as he sings Schick’s words, written from the perspective of someone who rejects vaccines.

“My life is like the Holocaust. I say this with great pride,” one verse goes. “’Cause public health and safety are the same as genocide.”

Another line says, “Nazis had a problem with the Jewish folks existing, but ghetto life was nothing to the stuff that I’m resisting!”

“There’s something to be said, I think, for if you’re really angry, turning it into something where you get to be calm about it and someone else gets to be upset,” said Weinberger.

The song is a deeply Jewish response to a disturbing trend, he added.

“When Jews have to deal with people who put them down, in whatever form it is, there’s a long tradition of dealing with it via humour,” he said.