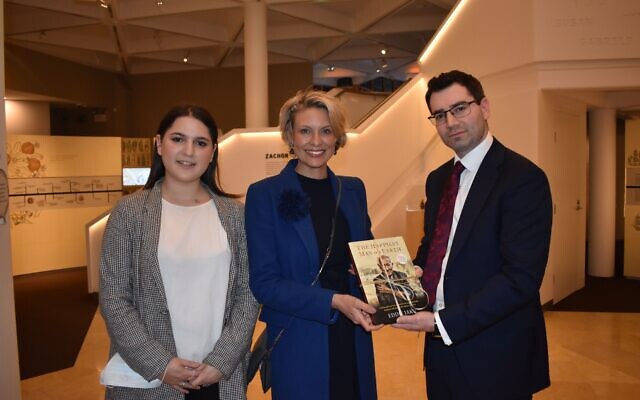 She was invited after social media posts surfaced last month in which she likened her lobbying to stop transgender athletes from competing in women’s sport to standing up against the Nazis during the Holocaust.

After the tour, Bark handed Deves a copy of the late Holocaust survivor Eddie Jaku’s book, The Happiest Man on Earth, as well as The Choice by Edith Eger.

“I am humbled and honoured to have been extended this invitation today,” Deves said on the conclusion of the visit.

“An exhibition like this is a sobering reminder of the atrocities that can be committed, and how fragile human lives are. The Holocaust must never be allowed to happen again and under no circumstances must it ever be trivialised.”

Prior to her visit, Deves told Bark that as a child she had read The Diary of a Young Girl by Anne Frank, and in her adult years The Rise and Fall of the Third Reich, and had long held an interest in 20th century history. She has previously visited the United States Holocaust Memorial Museum in Washington and Dachau concentration camp in Germany.

“We are grateful that she took the time to tour the museum,” Bark said.

“We hope she will learn from this experience and reflect upon her visit and the incomparable devastation caused by the Nazis.

“Nazi and Holocaust analogies cannot be used to compare modern day events in Australia. It is extremely concerning to see a rise in the use of these comparisons during the federal election campaign. This must stop.”

Sumption said, “The Sydney Jewish Museum invites anyone, with any background or set of beliefs, to visit us so they can learn about the Holocaust, hearing directly from survivors about how this chapter of history reverberates to this day. We view it as our duty to educate against discrimination, address misinformation, and advocate for human rights within a modern Australian context.

“By sharing important lessons from history, both abroad and in our own backyard, we help challenge assumptions, start respectful conversations and inspire meaningful change.”

Foster commented, “Comparing any aspect of life in free and democratic Australia with the murderous brutality of the Nazi dictatorship in Germany is not only historically fallacious but also disrespectful and callous towards those who survived Nazism.

“Having now met with a survivor and with people like myself who lost family in the Holocaust, I also hope Ms Deves has a deeper insight into how readily hatred and prejudice of any kind can descend into unspeakable barbarism.”