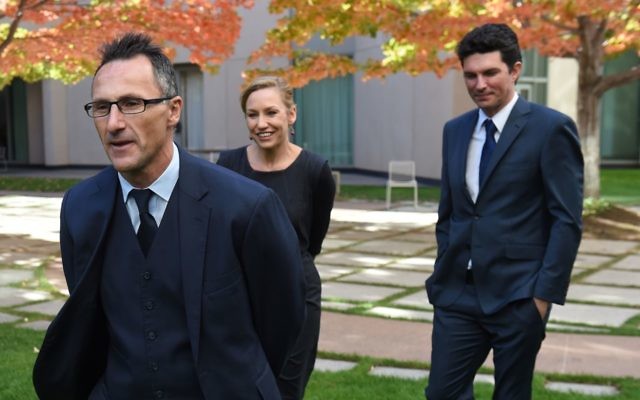 IGNORING the fact that the Jewish State has existed for almost 70 years and is recognised in international law, Greens leader Senator Richard Di Natale this week earned the ire of community leaders for declaring “absolutely” that he does not support the establishment of a Jewish state and does not believe it would be conducive to a two-state solution.

In doing so, he not only sought to turn the clock back to before 1948 but also to before two weeks ago when The AJN asked him if Palestinian president Mahmoud Abbas should recognise Israel’s existence as a Jewish State.

“Of course,” he replied. “How can you have a two-state solution when you refuse to acknowledge the right of one state to exist? It’s patently nonsense.”

While his answer received enthusiastic support online from those who saw his pronouncement as a change for the better from the usually hostile Greens, others took umbrage and contacted his office.

The backlash prompted a clarification, in which his executive assistant stated that Di Natale was “concerned about the way in which his comments were reported” and that while he supports a two-state solution, “the establishment of a ‘Jewish state’ (as opposed to an ‘Israeli state’) is not conducive to that outcome”.

When The AJN contacted Di Natale’s office, a spokesperson said they didn’t mean to imply there had been “an error in reporting”, explaining “it was just a misunderstanding”.

“It’s a case of the question that Richard answered was slightly different to what was actually asked,” the spokesperson said.

Di Natale this week reiterated his position in correspondence with the Executive Council of Australian Jewry (ECAJ). “I have always supported a peaceful, two-state solution for the Israel–Palestine conflict that upholds the legitimate rights and aspirations of both the Palestinian and Israeli people to live in peace and security in their own independent, sovereign states.

“My comments in the AJN piece were intended to reflect that view and that view alone. I have never believed that the establishment of a ‘Jewish state’ (as opposed to an ‘Israeli state’) is conducive to this outcome and I absolutely do not support that goal.”

Stressing that Israel’s establishment “as ‘the Jewish State’ is not a goal. It has been the reality since Israel’s proclamation of independence in 1948” and citing its recognition as such by the United Nations and in international law, ECAJ executive director Peter Wertheim wrote to Di Natale, “When you deny Israel’s character as the state of the Jewish people you not only place yourself against the entire current of history and international law, you also deny the right of national self-determination of the Jewish people.

“You thereby impliedly endorse the proposition that the Jewish people collectively are to be treated as having inferior rights to other nations. No self-respecting Jewish person or group can support you while you adhere to this fundamentally misconceived and unjust position.”

Labelling Di Natale’s “about turn” as “profoundly disquieting”, Zionist Federation of Australia president Danny Lamm also noted the UN and Israel’s Declaration of Independence, as well as statements by US President Barack Obama as supporting its existence as the Jewish State.

He added, “Senator Di Natale’s revised position on Israel should also be assessed in the light of Articles One and Four of the Palestinian Basic Law (2003) that respectively declare: ‘the Palestinian people are part of the Arab nation’; and ‘the principles of Islamic sharia shall be the principal source of legislation’.

“It would be useful to ask whether Senator Di Natale’s objection to national ethno-religious identity applies solely to a Jewish Israel, or extends to an Arab/Muslim Palestine as well?”

Australia/Israel & Jewish Affairs Council executive director Colin Rubenstein also expressed disappointment that Di Natale “felt the need to step back from what was the refreshingly fair, even-handed position he expressed in The AJN”.

Given the Greens “unreasonable prejudices against Israel”, Rubenstein said, “To gain credibility on the Middle East issue, Senator Di Natale needs to lead the Greens away from these unhelpful positions and towards a stance that favours the compromises necessary for the negotiated, peaceful two-state resolution he rightfully notes is the only way forward.”

B’nai B’rith Anti-Defamation Commission chair Dr Dvir Abramovich said, “It is hard to believe that a leader of a major political party in Australia would deny Israel’s right to exist as a Jewish state, a position which by extension denies the Jewish people the right to self-determination.

“President Obama, the Pope, the French Prime Minister and numerous international leaders have affirmed Israel’s right to exist as the homeland of the Jewish people and have denounced those who refuse to acknowledge Israel as a continuation of thousands of years of Jewish history.

“We call on Senator Di Natale to retract his statement and to openly declare his support for Israel as a Jewish state.”