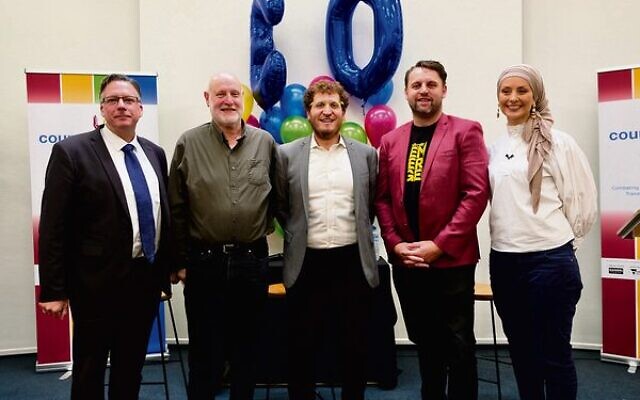 “Being not racist is not enough. You have to be anti-racist,” Korin Gamadji Institute director Aaron Clark told last week’s Courage to Care panel breakfast.

Clark was one of four panellists at the event at The Ark Centre last Tuesday. Other panellists were the centre’s Rabbi Gabi Kaltmann, who is a member of the Victorian Anti-Racism Taskforce, Courage to Care facilitator Dr Mark Kestin and Camberwell Grammar middle school head Shaun Burke.

The panel was facilitated by social commentator Susan Carland.

Guest speakers at the event also included Holocaust survivor and Courage to Care speaker George Deutsch, who told his story to those gathered.

“I focus on people who risked their lives to save my parents and me, people who have the courage to care and I do that to honour those people, to keep the memory of what they did alive, and to send the message that ordinary people can make a difference,” he said.

Joining Deutsch was Camberwell Grammar year 8 student Ashton Semczyszyn, who has participated in Courage to Care’s upstander programs a number of times.

Courage to Care CEO Mike Zervos told the breakfast that major societal issues, especially the pandemic, had led to a spike in discrimination and racism in Australia.

He explained that Courage to Care is fighting against racism and intolerance by working at a grassroots level with school students across Victoria to create a generation of upstanders rather than bystanders.

“We are enabling students to stand up against racism and broader societal issues such as homophobia, ableism, sexism and bullying generally,” he said.

“It’s our mission to create a generation of upstanders – one school at a time.”

Rabbi Kaltmann said it “was a pleasure” to sit on the panel.

“Our community plays an important role building a society where racism and discrimination is not tolerated, and our diversity is celebrated as our greatest strength,” he added.