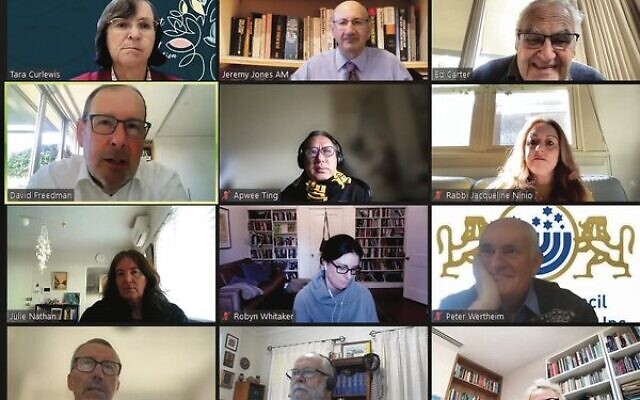 Representatives of the Uniting Church in Australia and the Executive Council of Australian Jewry met to discuss the role of religion in society.

A HIGHLY productive discussion around the role of religion and religious organisations in society recently took place.

In the shadow of the 2022 federal election, delegations from the Uniting Church in Australia (UCA) and the Executive Council of Australian Jewry (ECAJ) met to discuss the topic.

It was the 53rd time the National Dialogue has met since it was founded more than 30 years ago by former ECAJ president Leslie Caplan and Reverend D’arcy Wood, and it was done so as an attempt to build a relationship based on real understanding and trust.

Reverend Dr Tara Curlewis – a former co-chair of the Australian National Dialogue of Christians, Muslims and Jews – was the key organiser of the meeting in her capacity as leader of the UCA delegation.

Jeremy Jones – former president of the ECAJ and current director of international and of community affairs for the Australia/Israel & Jewish Affairs Council – led the ECAJ delegation.

“Having participated in more than fifty of the dialogues with the Uniting Church, I can say without fear of contradiction, that each of our dialogues have been extremely worthwhile and that a respectful, trusting relationship has been developed,” said Jones.

“We are all aware of the challenges facing our individual faith communities and benefit greatly from hearing about the experience of others.”

The meeting opened with presentations on the festivals of Shavuot and Pentecost, with Rabbi Jacqueline Ninio of the Emanuel Synagogue making the lead presentation from the Jewish community and Robyn Whitaker presenting for the UCA.

All members of the ECAJ delegation contributed to the discussion on religion in public life, with wide-ranging opinions contributing to an informative, animated discussion.

The Jewish participants, in addition to Jones, were Rabbis David Freedman and Jacqueline Ninio, Melinda Jones of NCJWA, Julie Nathan and Peter Wertheim.