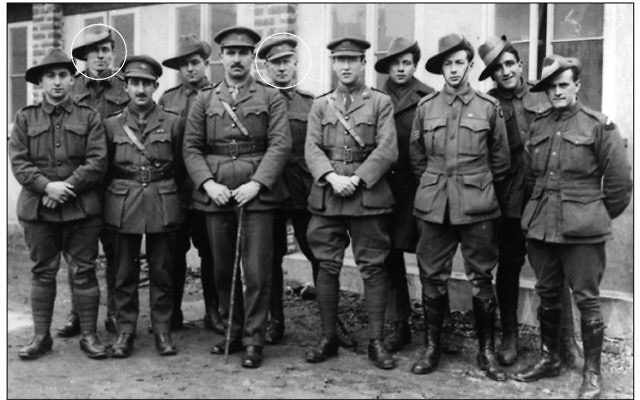 WITH the Centenary of Anzac fast approaching, the Australian Jewish Historical Society (AJHS) needs your help.

Ahead of the various activities and commemorations planned as part of the Centenary of Anzac Jewish Program (CoAJP), Russell Stern of the AJHS has been compiling lists of Jewish servicemen and women.

To this end, the AJHS is asking for the community’s help on two fronts. One is to identify the unidentified soldiers in this photo, in addition to other photos on the NSW Association of Jewish Ex-Servicemen and Women (NAJEX) website.

The second is that, despite Stern’s research, there are still some servicemen from World War I who registered as another faith on their enlistment form, yet are recorded in the landmark Australian Jewry Book of Honour: The Great War 1914-1918 compiled by Lt Harold Boas in 1923, so they still need to be clarified as Jewish.

“Particularly in the year of the Centenary of Gallipoli, it’s important that we recognise the service of our Jewish forebears and try to complete the task of identifying them all,” CoAJP national coordinator and NAJEX board member Peter Allen said.

“We encourage members of the community to come forward and provide any information to the AJHS in this endeavour,” added Stern, whose special list can also be perused on the NAJEX website (najex.org.au).

Among the soldiers named are two 20-year-olds, Private Ernest Arthur Leone – who landed at Gallipoli on May 26, only to be wounded the next day and succumb to his wounds – and Private Frederick George Gabriel, who was killed in the attack on Hill 60, the last great offensive of the Gallipoli campaign.

Both men are commemorated at the Lone Pine Memorial in Gallipoli.

The CoAJP is also distributing to synagogues around Australia a list of approximately 200 Jewish Diggers, who made the supreme sacrifice in WWI, so that from Anzac Day this year to Remembrance Day in 2018, they can be remembered in shul on the Shabbat of their centenary yahrzeit.

Do you recognise the circled soldiers? Photo: Australian War Memorial