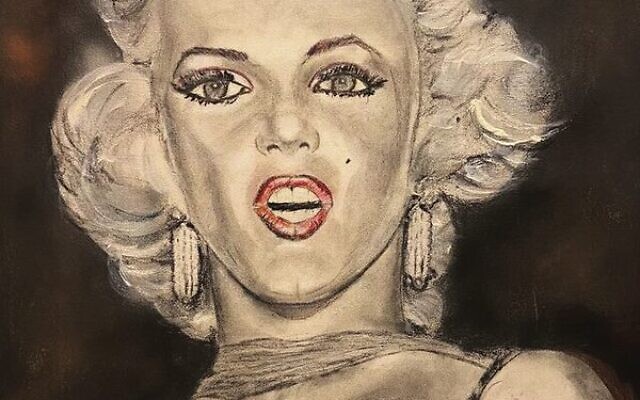 Artist Michelle Marks began painting as a way to cope with her grief after the passing of her father, Laszlo.

Laszlo, a Holocaust survivor, lost his mother, father, sister and brother to the Holocaust. While he was sent to work in a concentration camp due to his height and physical strength, his family were all taken away to the gas chambers in front of him. After the war, he was fostered out to an Australian family with only the clothes on his back.

Picking up art with inspiration from her grandfather who painted, as well as her mother and daughter, Michelle began painting portraits of her beloved father.

Hoping to send a message, Marks then began painting the faces of people known for the adversities they faced, such as Marilyn Monroe and Vincent Van Gogh, who she believes serve as a reminder to people that despite life’s difficulties, people can accomplish great things and inspire others through their strength and resilience; just like her father.

“Anyone can have a very terrible start, but you can make something of yourself if you want to,” she said.

While Marks doesn’t describe herself as a professional artist, she does consider art a part-time career. Continuing on her father’s legacy and her connection to her Jewish Hungarian upbringing, today, she loves painting her family – her husband, children and grandchildren.

In donating her artwork, she felt that she would be able to help spread her message of strength and resilience to the children involved with the organisation, as well as the wider community.

The Magical Getaway Foundation is a grassroots charity sending underprivileged Australian families on holidays to help them build a lifetime of treasured memories and increase their community participation, while decreasing social isolation and stress.

In December, the foundation has planned for a family of five to take a trip to the sandy beaches of Lorne, while another six families will get the chance to drive down to see the Phillip Island penguins.

Marks’ work will be on display at an Art Expo on Sunday, November 28, at Malvern Town Hall. The exhibition will run from 1-4pm with Australian actress and foundation ambassador Kat Stewart hosting the afternoon.

Marks hopes that for the families who purchase her artwork, her paintings will serve as a reminder that while one day life may seem too much or too dark, the next day there is always the possibility of sunshine.