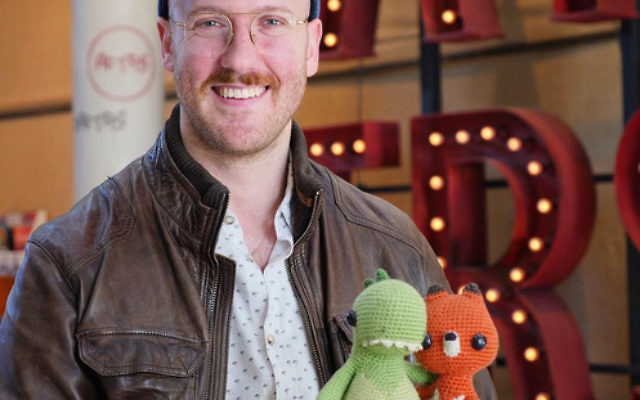 Writer and co-director of Lost & Found, Bradley Slabe, is thrilled with the success of his stop-Photo: AFTRS

A PICTURE is worth 1000 words seems a fitting sentiment for a short film with no dialogue that has taken out the highest honour in this year’s Australian Writers’ Guild Awards (AWGIE Awards).

The charming Japanese-inspired, stop-motion short Lost & Found chronicles the journey of a knitted dinosaur that makes sacrifices to save the love of its life.

Producing a powerful, dialogue-free script is no small feat, but writer and co-director Bradley Slabe has successfully risen to the challenge.

“I like making storytelling more universal by taking away language and allowing viewers to relate to the characters’ decisions and actions,” Slabe told The AJN.

“There were moments during production where we would think, ‘It would be so much easier if we could just have dialogue.’ The faces [of the knitted creatures] are so minimalist that it can be hard to express what we are trying to express, but we took that as a challenge.”

After winning the AWGIE Award for the Animation category, Lost & Found continued to reel in the accolades at the awards ceremony held at Sydney’s City Recital Hall last month.

Much to the surprised delight of Slabe, the film took home the 2018 Major Award, selected from the winners of all 18 categories.

“It was a total shock,” said Slabe. “I was absolutely stoked to receive the Animation Award. I had it protected between my feet when I knew they would be announcing the last award as everyone would be standing up, and I didn’t want anyone to accidentally kick it over. I’m looking around thinking, ‘I wonder where the winner will be standing?’ I don’t think I was even looking at the announcer when he said my name.”

The AWGIE Awards are just two of many honours that the film has received.

Co-director Andrew Goldsmith won the ‘Gold’ Award for Short Film at the Australian Effects and Animation Festival, and Slabe recently received the Grand Prize at Seoul Promotion Plan, providing him with leverage to develop the short into a series.

“The cash prize isn’t enough to make the show, but it certainly allows for some meetings [that may help us get there],” Slabe said.

Earlier this year, the young directors also won the Yoram Gross Animation Award, making them eligible for an Oscar award.

Having been recently nominated for various other awards, the accolades may keep on rolling in.

Lost & Found is in the running to win Best Short Animation at the Australian Academy of Cinema & Television Arts, and producer of the short Lucy J Hayes has been nominated for the Best Short Film Production of the Year at Screen Producers Australia, while sound designers Ryan Granger and Adam Hunt may also soon join the list of award recipients if they secure Best Sound for an Animation Short Film at the Australian Screen Sound Guild.

Slabe wasn’t the only Jewish talent in the AWGIES spotlight, with writer Joel Perlgut winning the Short Film category for I F**ked a Mermaid And No One Believes Me.

“It means a lot to get a nod from a place like the Writers’ Guild, and to be young when it happens is amazing and humbling,” said Perlgut. “Having senior writers say you are a good writer is enough to keep you going for a few years in the indie filmmaking wilderness.”

The film is nostalgic in tone, reminiscent of – and inspired by – summer family holidays.

“There is something strange and magical about going to the beach,” said Perlgut. “The film’s tone of voice is like an older person writing a young adults book as the boy is 17, but somewhat bitter and cynical about the world.”

Quick to praise Perlgut was director Madeleine Gottlieb: “I’m thrilled for Joel, our producers Liam Heyen and Cyna Strachan, and our whole Mermaid family. Joel is a very special writer, his voice is so funny in a really detailed, specific way and he has a brilliant brain. Working with him to bring this story to the screen was a true joy.

“As a female director, it was crucial that we avoid creating the stereotypical ‘beautiful’ creature that audiences expect. Our mermaid is weird and slimey and is fascinating because of those things – not in spite of them.”