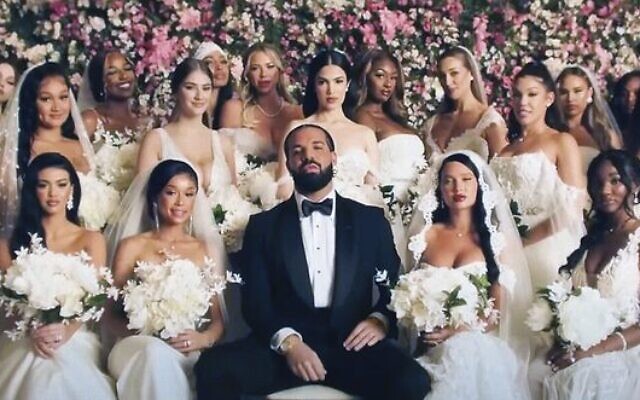 A screenshot from the Falling Back video

As part of the surprise drop for his new album Honestly, Nevermind, Canadian Jewish musician Drake released a music video for his new song, Falling Back, that features him as the groom in a wedding officiated by an Orthodox rabbi in a black hat, with his Jewish mum Sandi Graham as a guest.

There’s nothing Orthodox (or safe for work) about the wedding itself, though, which features 23 brides.

What ensues after the ceremony is a raucous celebration full of dancing and strobe lights.

At one point, one of the brides is lifted in a chair for the hora as she waves a napkin in the air.

A few moments later, Drake is also seen dancing with a napkin in hand.

Toward the end of the video, Drake and his 23 brides pose for pictures in what loosely resembles the photo shoots that sometimes accompany the bedeken ceremony.

This isn’t the first time the multi-platinum-selling artist has invoked his Jewish background in his musical career. Drake posed with a kiddush cup and Sabbath candles for the cover of his 2012 album Take Care, and he staged a different Jewish tradition – his own re-bar mitzvah – in the music video for his single HYFR.