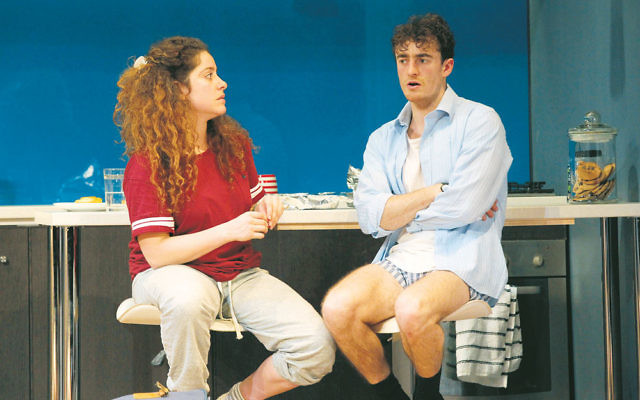 THEATRE REVIEW by Danny Gocs. The stage production Bad Jews has sparked controversy over its title, but the play by New York playwright Joshua Harmon is a thought-provoking look at important issues, ranging from Holocaust remembrance and assimilation to loss and legacy.

The 90-minute play, which is having its Australian premiere season at the Alex Theatre in St Kilda, is not all heavy going – Harmon has lightened the mood with plenty of witty one-liners and observations.

The action is set in a cramped Manhattan apartment following the funeral of Holocaust survivor Poppy Feygenbaum where we meet two of the grandchildren, shy apartment owner Jonah (Matt Whitty) and his extrovert out-of-town cousin Daphne (Maria Angelico).

Jonah prefers to bury his head in his laptop, but Daphne wants to discuss Poppy’s Chai necklace, the family heirloom that she wants to inherit, arguing that she is more religious than the others.

The action accelerates when they are joined by Jonah’s older brother, uptight Liam (Simon Corfield) and his non-Jewish girlfriend Melody (Anna Burgess), who missed the funeral because they were skiing in Aspen.

Fiery clashes ensue between Daphne and Liam over a variety of issues that go well beyond the Chai necklace, including religion, assimilation and how the current generation of young people can continue the memory of the Holocaust.

Both actors give excellent performances as the angry confrontation engulfs all four characters.

Whitty shows his acting talents as the nebbish Jonah, whose character tries to blend into the background and does not elicit much sympathy.

And Burgess also works hard as the non-Jewish girlfriend caught in the middle of the family dispute.

Bad Jews is directed by Gary Abrahams and produced by Aleksandar Vass – both of whom are Jewish – and despite a sluggish start, the action and humour keep the tempo going until the climax, which contains an unexpected twist.