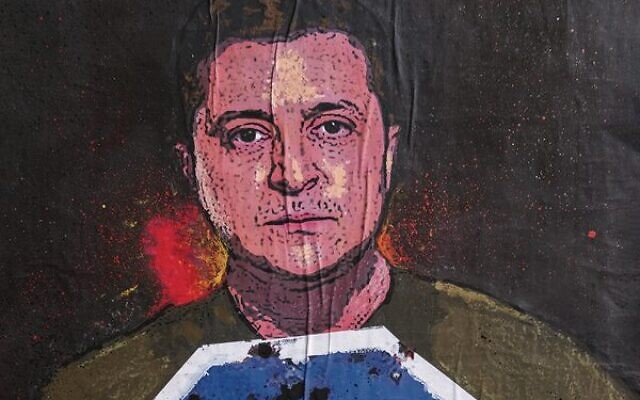 IT feels like we are arriving at a major fork in the road of history. A global pandemic, democratic Ukraine under attack and at home in Australia devastating floods compounding looming inflation and rising cost of living pressures.

These are serious times and they demand serious leadership.

Like so many people around the world, my eyes have been glued in the past few weeks to the Russian invasion of Ukraine.

I’ve been captivated by the resilience and courage of Ukraine’s President, Volodymyr Zelensky. Who could have predicted this Jewish former comedian becoming perhaps modern history’s most inspiring and unifying global leader since Nelson Mandela?

I may not speak Ukrainian, but when President Zelensky speaks, I understand his message as if he is talking to me directly.

Faced with pressure that many would wilt under, he has only grown in stature.

He has united Europe, sharpened NATO’s resolve and galvanised the United Nations.

At the UN General Assembly, both Australia and Israel joined nations around the world to condemn Putin’s invasion.

At this time, Australia is not only sending President Zelensky and all of Ukraine our moral support, we are also sending lethal aid, and rightly so.

Democracy matters. The Jewish people have learnt this lesson the hard way – democracy is precious, it is sacred, and it is worth fighting for.

For so much of our people’s history, we have not had democratic freedoms.

We have all heard the stories from generations past about the lives they left behind when they fled the antisemitism and dangers of war-torn Europe. It is heartbreaking that many Jews who remained in Ukraine are now being forced to flee like those before them.

In stark contrast to World War II, Israel exists as a safe haven for the Jewish people, and has already begun providing refuge for the more than 100,000 Ukrainians expected to arrive.

Australia too will provide safety to Ukrainians fleeing Putin’s war, especially as the indiscriminate bombing and targeting of civilian areas escalates.

At home, where we have our own vibrant democracy, we are just a couple of months away from another federal election.

Thankfully we don’t face anything like the situation that confronts our friends in Ukraine.

Instead, we have the opportunity to participate in the kind of free election that Putin has denied to the Russian people and is now trying to destroy in Ukraine.

Whomever you vote for in this election, as we watch world events unfold, it is incumbent on all of us to cast our vote with thought and care.

As we are reminded how precious democracy is, it is important we think about the future of our country, the direction in which we are heading, and how we think our democracy should be shaped.

My first term in Parliament has been through three tumultuous years, but it has been a true privilege to serve as the Member for Macnamara, and to represent our community in our Federal Parliament.

As we head into another election campaign, our Jewish community should feel confident and proud that irrespective of whoever forms government, it will be one that is committed to safeguarding the interests of our community.

From combating antisemitism in line with the IHRA Definition to maintaining strong ties with our friends in Israel, both parties have demonstrated their steadfast commitment to our cause.

And indeed, the more bipartisanship we see on Israel and the Jewish community, the better.

The choice we face at this election is not who will be good for our Jewish community, but in what kind of vision we see for our nation’s future, and what path we choose to take as we rebuild from a tumultuous three years.

In watching the courageous leadership of President Zelensky, it is hard not to think that those who seek to lead this nation should take note and try to emulate some of his attributes.

The challenges we face are very different to those faced by Ukraine, but we still must deal with what is in front of us.

Whether we are talking about the bushfires, the floods, the pandemic, our aged care crisis or how we tackle the big issues of our time, we must strive for better.

Like so many members of the Jewish community, I am incredibly thankful to live in Australia and I feel pride in the modern, multicultural nation we live in.

We are a smart, caring and tolerant nation, one that has been built by people who’ve come from all corners of the world.

When it comes to solving the big issues of our time – from war and peace to tackling the threat of climate change – we should be leading the way in finding global solutions, not shrinking into the background, or passing the buck.

The next three years will be critical for our nation’s future. I believe we should choose a future with less partisanship and division, and more unity and stability.

And hopefully we see a future of peace – for Australia, for Israel and especially for the people of Ukraine.

Josh Burns is the Labor MP for the Federal seat of Macnamara.