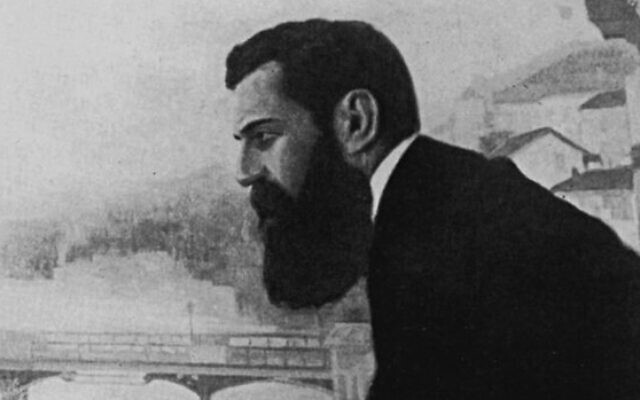 "A doer and dreamer". Theodor Herzl at the balcony of the Drei Konige Hotel, Basel, Switzerland, following the Fifth Zionist Congress.

I want to build on a theme I’ve grappled with throughout my tenure as president of the Zionist Federation of Australia (ZFA) – the need for us, as Jews, to define ourselves, not by the rhetoric of our enemies, but rather by our authentic Jewish values and the dreams of leaders whose words and actions have stayed true to those values.

In 1903, Theodor Herzl refused to use the Kishinev pogroms to advance his campaign for the creation of a Jewish state because, in his words, “It is distasteful to us to make political capital out of disasters.”

Even at a time when antisemitism was rife and the urgency for Herzl’s Zionist dream to be realised was intense – he understood that Zionism had to be something far greater than a response to anti-Zionism or antisemitism.

As a community and as a people – we are highly competent “doers”.

The Australian Jewish community is regarded as one of the most active, most Zionist communities anywhere in the Diaspora.

But at times I feel we need to be asking ourselves whether we are as good at dreaming as we are at doing?

In the spirit of Herzl, to be dreamers:

• We must ensure that, while we occupy ourselves with ideological attacks from our enemies, we explore our own Jewish identity and purpose.

• As we cultivate the next generation to defend Zionism, the very same generation must be working to improve Zionism and the State of Israel.

• We must maintain and build pride in our Zionism – not simply to protect ourselves against those who seek to destroy us but because we are proud torchbearers of a 2000-year-old culture and value system, the foundation of western civilisation.

To take the dreaming seriously, we have to keep our eyes on the prize of a community and a state that genuinely reflects authentic Jewish values.

In 1984, Meir Kahane was elected to the Knesset. Whenever Kahane would stand to address the Knesset, Likud prime minister Yitzhak Shamir would lead his entire faction in a walkout.

He served just one term before later being convicted of acts of terrorism and his party was eventually banned for inciting racism. Yet today his ideological heir, Itamar Ben Gvir, and his misleadingly named “Religious Zionism” party are polling strongly.

Certainly, last year’s riots in Lod shook many Israelis to their core. Initially triggered by groups of young Arabs burning shules and attempting to lynch Jewish fellow citizens on the streets, the riots lured Jewish mobs to the streets to try to lynch Arab fellow citizens.

Ben Gvir played a central role in whipping up the violent Jewish response. No surprise from a man who, until recently, had a picture hanging on his wall of Baruch Goldstein, a Jew who murdered 29 people as they prayed in a mosque.

Perhaps the saddest part of this story is that history could have looked back on the last Israeli government as the beginning of an era of healing between Arab and Jewish citizens of Israel.

It was the first government to include an Arab party. Mansour Abbas was the first mainstream Arab Israeli leader to state publicly that he and his party accepted Israel as a Jewish state.

In contrast, Ben Gvir not only channels Kahane’s racism, but also his isolationism that pits Israel and the Jewish people against the rest of the world.

To my mind, if Zionism aspires to position the Jewish people as a light unto the nations, as a torchbearer of morality based on Jewish values, Ben Gvir’s approach is inherently anti-Zionist.

An ideology of hatred – of pitting one group against another – is entirely inconsistent with building a state and a community that’s capable of dreaming as Herzl did.

And let us not fool ourselves that we are immune from it here in Australia.

We too have elements within our community on the extreme right, who speak the language of Ben Gvir … who admire Pauline Hanson and attempt to align the Jewish community’s agenda with that of One Nation, and accuse Jews they disagree with of being ‘kapos’, using social media to play to people’s insecurities.

Likewise, on the extreme left of politics in this country, there are those who seem capable of only seeing Israel’s faults but appear incapable of ever seeing its virtues or the faults of our enemies. Who are prepared to justify antisemitism masquerading as anti-Zionism because it emanates from their own side of politics.

At either extreme, these elements are incapable of fulfilling the Zionist dream because they are too busy focusing on division and disagreement.

Small in number and unrepresentative of the community, does this even matter?

It matters because it is critical that we follow Rambam’s golden middle path. Just as we invest enormous effort to ensure that the battle against antisemitism is not the domain of the left or the right, we must apply the same standards among ourselves.

Placing Israel’s security as the number-one priority cannot and should not be seen as the exclusive domain of the right.

And standing up for human rights and democracy cannot, should not and is not the exclusive domain of the left!

If you need proof of that – look to Menachem Begin. There is no prime minister who valued democracy and the rule of law more than Begin. And likewise, Yitzhak Rabin was deeply committed to the security of Israel.

I raise these issues not to sow further division or mistrust, but from a genuine desire to remind you that, as we mark 125 years since the First Zionist Congress and are about to mark the 75th anniversary of Israel’s creation, dreaming remains as important as building for the Zionist movement, and for each of us as Zionist torchbearers.

Jeremy Leibler is president of the Zionist Federation of Australia. This is an edited extract of the speech he delivered at the ZFA’s biennial conference on October 30, 2022.