IT was Abram “Abe” Goldberg’s final promise to his mother on the morning they arrived at Auschwitz-Birkenau that has driven his life-long commitment to the memory and teachings of the Holocaust.

“When we lined up and heard the screams from the SS – ‘men one side, women and children the other side’ – my mother realised that she was not going to get out alive,” Goldberg told The AJN.

“And in those few, precious moments she told me, ‘Abram, you should do everything humanly possible to survive and when you will survive, wherever you will find yourself, you should tell people what actually happened.’

“I gave this promise on this forsaken ground that I will never be silent and I will try to gather all the information that was possible and always remember.”

Goldberg’s mother was immediately sent to the gas chambers, while he kept his promise to survive and tell his story, so that the horrors of the Holocaust will never be forgotten.

Goldberg was honoured with an Order of Australia Medal (OAM) in 2013 for his dedication to the Melbourne Holocaust Museum since its establishment in 1984. He has been a board member since 1989 and still makes regular appearances there at the age of 97.

Goldberg has also participated in three March of the Living (MOTL) programs.

“If we will dismiss it, so who will remember? Never let people forget,” Goldberg said.

“March of the Living is part of that. It’s important because it shows the youth of today and tomorrow the places where it actually took place.” 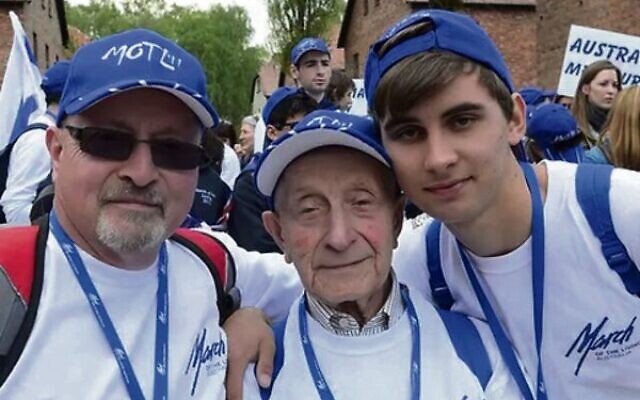 Clockwise from above: Charlie, Abe and Daniel Goldberg on March of the Living 2011; Laying stones and candles to remember the murdered at Auschwitz; The MOTL program ends with an uplifting trip to Israel; Watchtowers at Auschwitz; MOTL participants placing messages in the train tracks. Photos: MOTL

Goldberg didn’t find it difficult to return to Auschwitz for his first MOTL – “just the opposite, because I wanted to go” – but the third time was especially emotional.

In what was an incredibly proud and victorious moment, three generations of Goldberg’s family attended the MOTL program in 2011 when Abe was joined by his son Charlie and grandson Daniel.

“My son Daniel would have been in year 11,” Charlie told The AJN.

But it wasn’t the first time Charlie had joined his father at Auschwitz. In 1996 Abe, along with his wife Cesia (a Holocaust survivor herself) and their two children Charlie and Helen, travelled to Poland to honour the final wish of a dear friend and fellow survivor.

The trip was traumatic and the reason behind it, utterly heart-breaking.

“My friend, who died in Canada, wanted to be cremated and his ashes brought back to Auschwitz and deposited in the ruins of the crematorium II,” Goldberg said.

“He died in May 1996, but he wanted his ashes to be deposited on August 23. Why? Because this was the date he arrived with his brother and his mother and he lost his mother.

“I gave this promise on this forsaken ground that I will never be silent and I will try to gather all the information that was possible and always remember.”

“It was very traumatic. I tried to hold back the tears, but I could not.”

Goldberg has been back to Poland, his birth country, a total of eight times since he was liberated on May 2, 1945.

Next year’s MOTL delegation will be blessed with two Holocaust survivors, but it could well be the last time.

“Clearly, this is unfortunately one of the last years where we will be able to take survivors with us,” president of MOTL Australia Cedric Geffen told The AJN.

“We’ve been preparing for the future without Holocaust survivors, but bearing in mind one of the main pillars of the program, and what makes it so unique, is the fact we’ve always taken survivors with us, this literally will be one of the very last years.

“Every week, every month, there’s just another notification ‘in memoriam’. Hopefully come April we’ll still be blessed with two survivors – the same two that were supposed to come in 2020.” 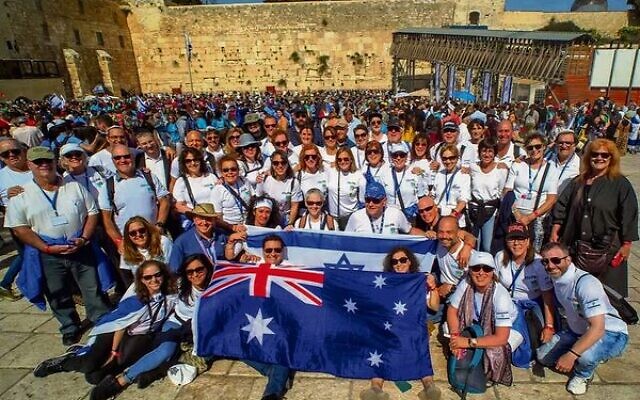 The MOTL program ends with an uplifting trip to Israel.

The annual event hasn’t been able to go ahead for the last three years due to the pandemic and next year’s will be a milestone one from many perspectives.

“The 80th anniversary of the Warsaw Ghetto Uprising; the 75th anniversary of Israel’s independence; and 35 years since March of the Living international initiated this incredible journey of remembrance and celebration in 1988.”

Next year’s MOTL Australia will focus on the young adult program, for ages 18-35, rather than the traditional student one, “because we see young adults as the future leaders of the community,” said Geffen.

It will be led by Dean Levitan, who is the current chair of Stand Up and is a graduate of MOTL.

“He’s a lawyer and his community engagement ever since MOTL has been, on all levels, related to social justice,” Geffen said.

“He’s an incredible young man and a leader for the future. We’re delighted he will be leading the young adult program.” 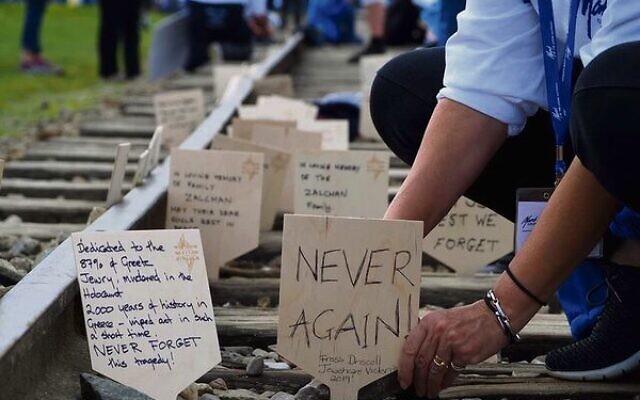 Levitan said changing the focus of the program to young adults makes sense and he is delighted to be leading it.

“I think the nature of the program is so impactful on people who are ready to be impacted, or who are ready to really engage and absorb everything that this kind of trip has to offer,” Levitan told The AJN.

“When you’re a bit younger, I think some people may not fully grasp and will grapple with the magnitude of what they’re learning about. When they’re a bit older we’re ready to engage with it.”

Another major strategic change, and a major drawcard, to the program is that it will be highly subsidised for young adults.

“Young adults are really at their ‘brokest’ when they start out in their careers,” Geffen said. “They’ve finished university, are establishing families, and they really don’t have the money. Even if they understand the importance, they’re not going to dedicate that kind of money to MOTL, so we have to support this.

“It won’t be free, but it will be heavily subsidised.”

“It sounds cliched to say, but it genuinely shaped my life,” Levitan said about his previous MOTL experience.

Being in Poland gave Levitan a sense of understanding injustice in a new way and he has dedicated a large part of his life to the pursuit of social justice ever since.

“The experience of going to Poland completely shook my sense of humanity,” Levitan said.

“I couldn’t understand how there was a group of people learning about, and talking about, injustice that happened all these years earlier, while at the same time there was a huge sense of apathy and indifference in the world to another genocide that was happening on the other side of the world (in Darfur). 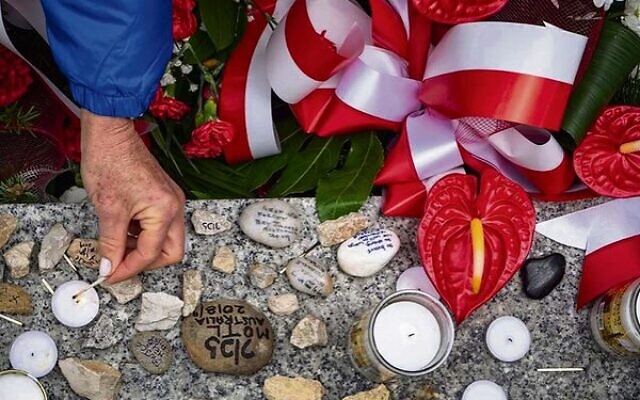 “Those two things just felt crazy to me. You go on March of the Living and you talk about how indifference was what enabled such large-scale devastation to occur, yet we continue to live in a world surrounded by apathy and indifference.”

Inspired and moved by the experience, and determined not to remain indifferent, Levitan returned to Australia and founded an organisation called YAGID (Youth Against Genocide in Darfur).

“We ran a bunch of protests and events and then I finished school and started working at Stand Up as a campaign manager, while also running around raising awareness about genocide in Sudan,” Levitan said.

“Then it was raising awareness about the plight of asylum seekers in Australia. So I was really motivated to just have this persistent sense of obligation to always be doing something and to not be a bystander.”

Next year MOTL Australia is open to New Zealand too in an effort to get as many people as possible, Jews and non-Jews alike, to experience the program.

In fact, in many ways Holocaust education for non-Jews is growing ever more important.

“Limiting it to the Jewish world is preaching to the converted,” Geffen said.

Levitan added: “I’m strongly of the view that the lessons of the Holocaust are universal, not just about Jewish people.

“They’re lessons about the world, our universal history as human beings. Of course, we have a unique connection as Jews and we are uniquely connected to our history, but fundamentally the Holocaust speaks to human history as well and to humanity generally.”

Levitan said there is a sense of urgency to embrace the program because, “even though the March of the Living program and travelling to Poland will still be incredibly impactful in years time, people I think will regret not embracing this opportunity”.

The MOTL program ends in Israel, which is vital as it moves from the horrors of Poland to a Jewish nation that is thriving.

Abe and Cesia Goldberg have always tried to speak openly to their children and grandchildren about their Holocaust experiences.

Charlie remembers first learning about it when he was around four years old.

“We were living in an area in Melbourne and mum would take me to the local kinder,” Charlie said.

“I noticed a lot of kids were being picked up by their grandparents, so one day I asked my mum, ‘Where are my grandparents?’ She burst into tears and took me home and told me all about it. They were both very open with it always.” 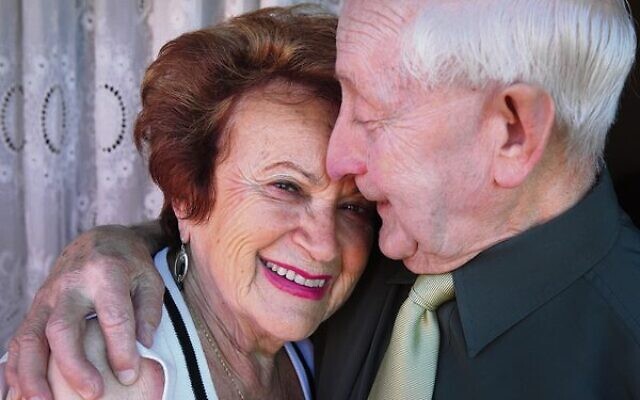 “This is why I always encourage people to speak out,” Abe added.

“There were people (survivors) who didn’t want to traumatise their children, but when they grow up they’d like to know the details of what happened.”

In addition to talking about his past for all these years, Abe recently wrote a book entitled The Strength of Hope: A Holocaust Survivor’s Guide to Love and Life, which will be released in coming weeks.

In it, he details the horrors of the Holocaust – “I couldn’t write it down in Birkenau, but I observed everything and I memorised it” – but it’s also about his love story with Cesia. They met in Belgium in 1946, got married the following year and moved to Melbourne, where they only had each other, in 1951.

The couple have just celebrated their 75th wedding anniversary and Abe will soon turn 98.