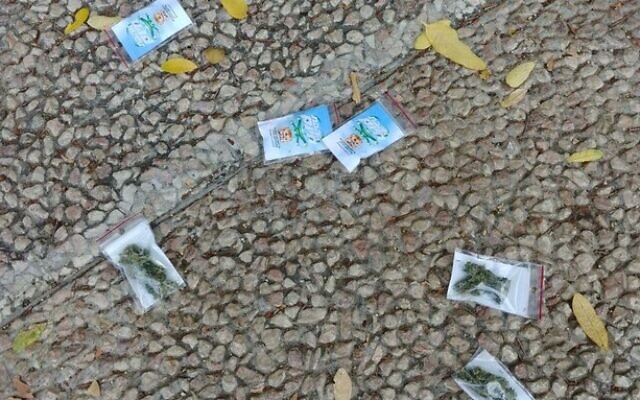 Tel Avivans rushed to scoop up the bags bearing the label with the words Free Love inside a green heart.

Never a dull moment in Israel: a drone hovering over Tel Aviv’s Rabin Square on Thursday afternoon dropped hundreds of tiny bags containing cannabis, many of which were snatched up by pedestrians. Just in time for the High Holy Days …

The drop is courtesy of a popular Telegram group named Green Glider that calls for the legalisation of recreational drugs. An announcement of the “Cannabis Rain Project” drops on the Telegram channel said that 1 kilogram (2.2 pounds) of cannabis, divided into 2 gram bags, will be dropped each week in a different part of the country, Israel’s Channel 12 News reported.

The drone drops were conceived as part of an effort to figure out how to get marijuana to consumers in a new way because of the coronavirus crisis, the announcement said.

Police arrested two men in their 30s who allegedly operated the drone and are accused of drug trafficking, the daily Maariv reported, citing a police spokeswoman.