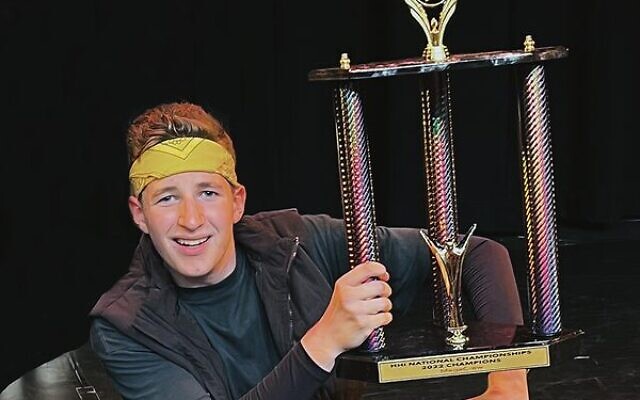 Maxwell Pozniak will represent Australia at the International Hip Hop Dance Championship in the US.

IT’S a hip hop first for Emanuel School, with student Maxwell Pozniak on his way to represent Australia at the international championships in America.

The year 9 student recently competed at the National Hip Hop Dance Championships at the Sleeman Sports Complex in Brisbane. His team, Kookies N Kream, came first in the prestigious Mega Crew Division and were rewarded with a trip to Phoenix in August.

Pozniak started dancing in year 1 when he joined Expression Dance School (EDS) in Bondi Junction. He’s taken classes in ballet, contemporary, lyrical, jazz, hip hop, breakdancing and acrobatics. He still takes classes at EDS, but at the beginning of 2020 he wanted a new challenge and auditioned for the Kookies N Kream (KnK) Mega Crew – an open age group dance crew that has competed in hip hop competitions for the past 10 years. They have won many accolades – including runners-up in the TV show Australia’s Got Talent.

The KnK Mega Crew comprises 31 people from different ages and diverse cultural backgrounds across Sydney. Not only has it been an incredible dance experience for Pozniak, but also an opportunity to build friendships with people he would not otherwise come into contact with.

Pozniak shared his excitement for the upcoming championships in the US: “Since starting dance when I was seven years old, it’s always been my dream to compete at the Australian Championships of Hip Hop International. To get first place with my crew, Kookies N Kream, and have the opportunity to represent Australia at internationals is the best feeling ever. All the training is totally worth it. Even though we train hard and for many hours, we know others are doing the same and even more. That spurs us on to train even harder. Dancing isn’t just an extracurricular activity for me – it’s my life.”

Principal of Emanuel School Andrew Watt said: “This is the first time an Emanuel student has competed in hip hop on the international stage and we commend Maxwell on his tenacity, enthusiasm and commitment. We look forward to following his progress in the international championships and into what will be a very promising future.”