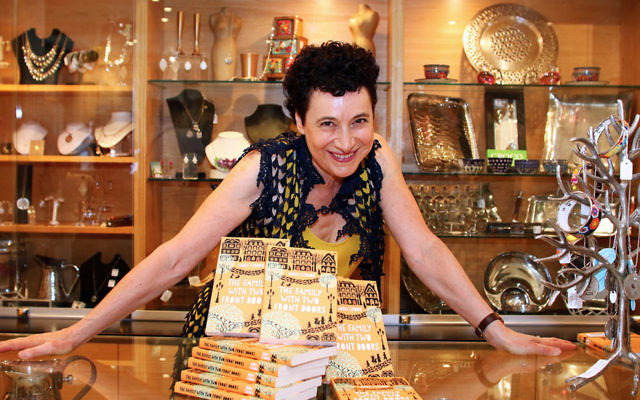 Author Anna Ciddor at the launch of her novel The Family With Two Front Doors at the Jewish Museum of Australia. Photo: Peter Haskin

GIVING life to the characters in her novels can sometimes be tinged with emotion for best-selling children’s book author and illustrator Anna Ciddor. And never more so than with her latest literary subjects – the Rabinovitches, a large, closely-bonded Chassidic family living in Lublin, Poland in the 1920s.

It is their fascinating and joyful pre-Holocaust world in which Ciddor submerges us through the pages of her latest novel, The Family With Two Front Doors, which was launched at the Jewish Museum of Australia on March 6 .

Most significantly for the Melbourne writer, the book – set to be enjoyed by adults and children alike – is an intensely personal one.

For it bears vivid testament to the childhood of Ciddor’s late grandmother Nomi, the sixth of the nine Rabinovitch children.

Tragically, only Nomi and two of her siblings survived the horrors of Nazism, as Ciddor reveals in a deeply poignant author’s note at the end of the book.

Yet Ciddor was adamant about one thing – The Family With Two Front Doors would not be a Holocaust story. Rather, she was hopeful the book would help “demystify the term Jew” for children the world over.

“Most of all,” says Ciddor, “I would love it to be translated into Polish and read by Polish children.

“I’m hoping it may also help combat anti-Semitism even a little bit because, through the book, you see that Jewish people are just normal people. Their customs and traditions might seem strange, but they’re not evil or something to be feared.

“This is a book for any child, because it’s not dealing with the realities of the Holocaust – it’s just waking them up to the fact that when there are horrible events that happen in the world, they actually happen to real, normal and nice people.”

During the past 30 years, Ciddor, who began her working life as a maths teacher before trying her hand at writing, has written and illustrated some 50 fiction and non-fiction books on everything from the Vikings to travel and Australian history. Interestingly, however, it took her two decades to write The Family With Two Front Doors.

“In 1991, my husband urged me to interview my nana about her family and her childhood,” says Ciddor. “I was reluctant because she had always been reluctant to talk about the past.

“But when I asked her about her time as a young girl before the war, this whole world suddenly opened up to me that I had never known about.

“Her father was a rabbi and she told me everything in such detail, from the colour of the wallpaper in their home and the way they celebrated the festivals to how she learned to make gefilte fish and how her oldest sister was married at the age of 15 in an arranged marriage.”

While Ciddor was fascinated by her grandmother’s stories, it wasn’t until five years ago that she finally felt ready to begin working on the book. She wasn’t prepared, however, for just how emotional a journey it would be.

“It was really hard at first, knowing what had happened to most of the family, and I did get teary. But gradually my grandmother’s brothers and sisters really came alive to me and I thought to myself ‘I’m doing this for them. Their lives were cut off, but I’m bringing them back and they’ll live forever now’,” she reflects.

“Although I do feel it’s a good and enjoyable read, it’s so much more than that to me.”

Immersed in the story, Ciddor – by now a grandmother of two – found herself on a plane in January of last year headed for Poland.

In Lublin, she walked in the footsteps of the generations before her, even managing to locate Nomi’s childhood home – with two front doors on the second floor of 30 Lubartowska Street.

“When I sat down to write the book, although I had thousands of words in notes, there were major pieces missing,” Ciddor recalls. “I still had important questions that needed to be answered, and the first gap was the family’s address.

“I then learned about a little Jewish museum in Lublin, and got in touch with a lovely young man there who was able to give me my family’s address.

“I went there and was able to get into the courtyard of the apartment block and to see their balcony. It was incredible.

“Everything that happens in the book – all of the characters, their names and the things that happen to them – is true.

“As I was writing the novel, I was thinking this is only the first book about this family, because I have only used a fraction of the material I’ve got.”

Does Ciddor believe her grandmother would be proud of her?

“Oh yes”, she says, adding with a smile, “She was always proud.”

The Family With Two Front Doors by Anna Ciddor is published by Allen & Unwin, $14.99 (rrp).