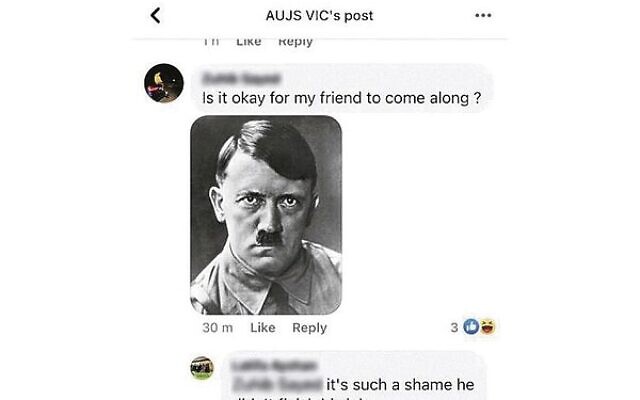 NSW Police are investigating a former NSW Department of Education employee who posted a comment on Facebook saying “it’s such a shame [Hitler] didn’t finish his job”.

The AJN can reveal that the Hate Crime Unit of the NSW Police Force has received a complaint from a member of the Jewish community over the comment, which appeared under a photo of the Nazi leader on the Australasian Union of Jewish Students (AUJS) Victoria’s Facebook page in May.

The AJN understands the woman who posted the slur could be charged with using a carriage service to menace, harass, or cause offence, which carries a maximum penalty of three years’ imprisonment.

It comes as NSW Parliamentary Secretary for Education Kevin Conolly revealed last week that six months after the comment was posted, the staffer was no longer employed by the department following an internal investigation.

Welcoming the decision, Secord told The AJN, “This has been a long-running and frustrating saga, but I’m pleased that the NSW government has confirmed that this person is no longer with NSW Education. Anyone making antisemitic remarks or posts should have been raced out of the department without delay. Unfortunately, it took the NSW government months to act.”

NSW Jewish Board of Deputies CEO Darren Bark added, “It was alarming that such comments were made by a representative of the NSW government, particularly the Department of Education, which has a fundamental responsibility to the safety and protection of our children.”

AUJS political affairs director Gabi Stricker-Phelps told The AJN, “We are grateful that the NSW Department of Education has finally taken this stance. We hope it sends a clear message to anyone engaging in antisemitic rhetoric that it’s not welcome, appropriate or tolerated in our society and that there are severe consequences for such behaviour.”