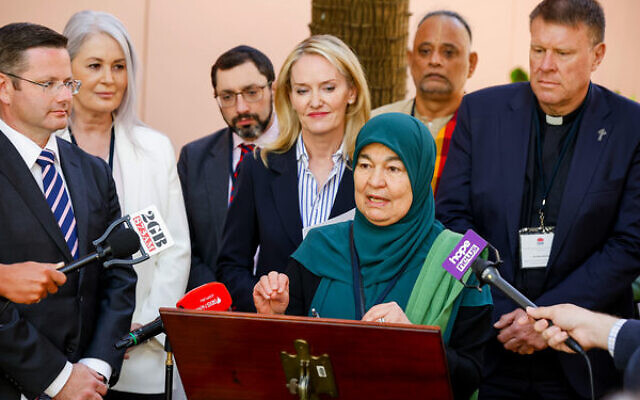 The declaration – which was developed in consultation with leaders from the Christian, Muslim, Jewish, Hindu, Buddhist and Sikh communities – included a number of commitments drafted and agreed to by the interfaith group to address, respond to and speak out against acts of domestic violence and better support victims.

“I think it’s very important that a rabbi signed this declaration on behalf of the Jewish community because domestic and family violence affects all communities and can take many forms, including physical, financial and through coercive control, and in our community through withholding or refusing to accept a gett,” Rabbi Elton told The AJN.

“I hope together we can reduce or eliminate domestic violence across all our communities.”

Minister for Women’s Safety and the Prevention of Domestic and Sexual Violence Natalie Ward said the declaration demonstrated a whole-of-community response to domestic and family violence.

“This declaration by senior faith leaders has helped create a united sense of purpose, ownership and commitment to reduce the prevalence of domestic and family violence,” she said.

Minister for Multiculturalism Mark Coure said when community and religious leaders and the NSW government work together, everyone benefits.

“We know these leaders play an incredibly important role within their respective communities and are looked to for guidance and information,” Coure said.

“The NSW government recognises this, and our partnership with them is the key to connecting with communities more effectively, especially when it comes to important issues like domestic and family violence.”