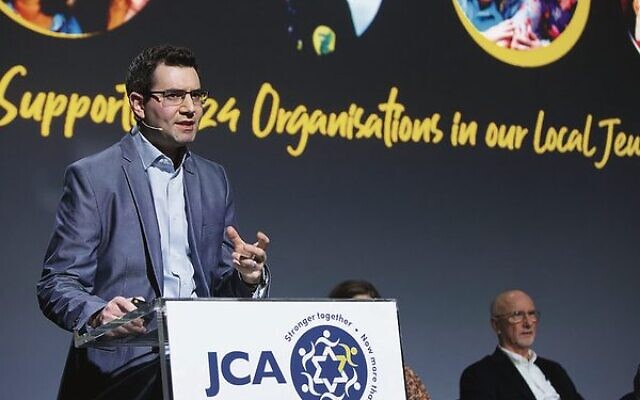 JUST over a year ago, I had the immense honour and privilege of joining the NSW Jewish Board of Deputies (JBD) as its CEO.

With the Hamas conflict two days in, a third of the year in lockdown, floods, a war in Europe and significant increases in the challenges from our external environment – it is fair to say that this has been a unique experience.

However, it has also been an incredibly rich and rewarding journey so far. Twelve months into the role, I have reflected on my learnings from my time at the Board, the broader environment we are facing, the work we have been doing and where we are going.

The Board is not an individual, it’s not the office bearers, its deputies or its associates. It’s community – and everyone in the community; a rich tapestry of practice, views, thoughts and opinions. That is why we are building the team that will take the JBD into the future to represent, stand up for and advocate for our community.

Being Jewish means being yourself, and the JBD is here to ensure that there is a vibrant NSW Jewish community. That we, as a community, can practise our faith with freedom and security.

Last year’s High Holy Days were an unprecedented time for our community, with shules shut, schools closed and our entire state in COVID-19 lockdown.

The JBD worked directly with the state government, NSW Health and NSW Police to ensure that, despite the restrictions, our community members could still hear the shofar on Rosh Hashanah and Yom Kippur with COVID-safe outdoor services.

This was the only example in the country of a faith community being granted an exemption to continue our traditions while abiding by the health orders.

Meanwhile, antisemitism continues to rear its ugly head each and every day. It remains in our very midst.

It is a constant reminder that while we prioritise the things we love to do most on a day-to-day basis, they are not possible without a safe and secure home to do them from.

Time and time again during the recent federal election campaign, we saw Nazi and Holocaust analogies used as a political weapon by candidates and their supporters.

Day in, day out, we saw countless inappropriate and hurtful comparisons, Nazi symbols sprayed on campaign posters, Hitler moustaches drawn on posters of our then-Jewish treasurer.

This normalisation of the Holocaust and Nazism is a key step to society forgetting the horrors it involved – and a step closer to history repeating itself.

The election might be over, but antisemitic incidents continue to pile in, both digitally and physically, at schools, shules, university campuses, in workplaces and in public.

Which is why I was honoured to stand side by side with our Premier Dominic Perrottet, Multiculturalism Minister Mark Coure and various faith leaders earlier this month to welcome the NSW government’s announcement of $28 million in funding for multicultural communities and the establishment of a Religious Communities Advisory Council.

This is a significant announcement – the biggest investment in interfaith communities in the state government’s history – and we are particularly pleased that the first order of business of the new council, led by former deputy police commissioner Nick Kaldas, will be addressing concerns regarding the safety and security at faith institutions.

Everybody should feel safe to be able to practise their religion, no matter what that may be.

When we look at our threats, we realise that these are not just threats we face as a community – they threaten all Australians, our democracy, truth, equality, multiculturalism – principles and values that we hold dear as Australians, not just as a Jewish community.

From BDS and antisemitism to right-wing extremism – it is the responsibility of all to call out attempts to undermine our tolerant and harmonious multicultural society.

And we do this by working with our brothers and sisters from other faiths and secular institutions to ensure that whatever form of racism, discrimination, persecution or vilification, we protect our people and our citizens. That we are truly there for each other, because what is good for NSW is good for our community and vice versa.

A good example of this is that when floods hit our state, the Jewish community mobilised to contribute, assist and ensure that we did everything we could to respond to a crisis affecting so many Australians.

Earlier this year, the JBD demonstrated its Jewish/Australian values, working together with the Hindu Council of Australia to give evidence before a parliamentary inquiry urging our state government to ban the public display of Nazi symbols. I am proud to say – the government listened.

A bill was introduced into Parliament by NSW Attorney-General Mark Speakman this week. A bill we championed collaboratively with our interfaith brothers and sisters; a bill that enhances the safety of not just the Jewish community, but Australian society.

This will be a historic piece of legislation and one we can all be proud of.

It has been a great privilege to work with the government, opposition and MPs from all sides of the chamber to progress this important work.

Our community is certainly not short of challenges, but there are also immense opportunities. Our work is a collective endeavour – our mission, a partnership – so let’s work together.

Darren Bark is the CEO of the NSW Jewish Board of Deputies.