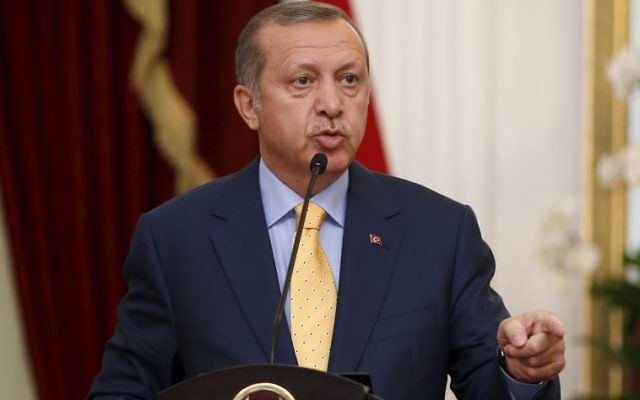 Turkish President Recep Tayyip Erdogan in an interview with CNN ensured that Jewish citizens living in Turkey will be safe, and slammed European countries for not heeding his terror warnings.

When asked by CNN correspondent Christine Amanpour about the heightened threat towards Jews in Turkey, Erdogan firmly replied: “We have a very significant number of Jewish citizens and they have always been safe and secure where they are in Turkey.”

He continued: “They have their own synagogues and schools and media outlets, which have always been secure and safe. Time to time I get together with the rabbis, with religious leaders, leaders of congregations and I talk to them, and wherever a need arises we do everything we can to meet those needs.”

On the alarming trend of anti-Semitism in Turkey and across Europe, Erdogan said: “I am one of the first political leaders officially declaring that anti-Semitism is a crime,” he said, adding “I expect an official declaration that Islamophobia is a crime against humanity as well. Islamophobia emerged from the Western countries and this is a challenge that we all together need to surmount.”

Erdogan’s interview comes after the Turkish President met with Jewish community leaders in Washington reportedly to smooth ties as Turkey and Israel seek to reconcile.

“Erdogan and the guests reiterated their willingness to strengthen cooperation and communication despite differences,” said a report Wednesday in Turkey’s Daily Sabah newspaper, citing “presidential sources.”

The American Jewish Committee, not present at the meeting, welcomed Erdogan’s overtures, while recalling recent statements by members of his party that blame Jews for Turkey’s woes.

“President Erdogan’s expressed commitment to ‘fight’ anti-Semitism is particularly welcome in light of past statements by him and other AKP leaders,” said Jason Isaacson, AJC Associate Executive Director for Policy and Director of Government and International Affairs, in an email to JTA. “The security of Turkey’s venerable – and vulnerable – Jewish community must be a high priority.”