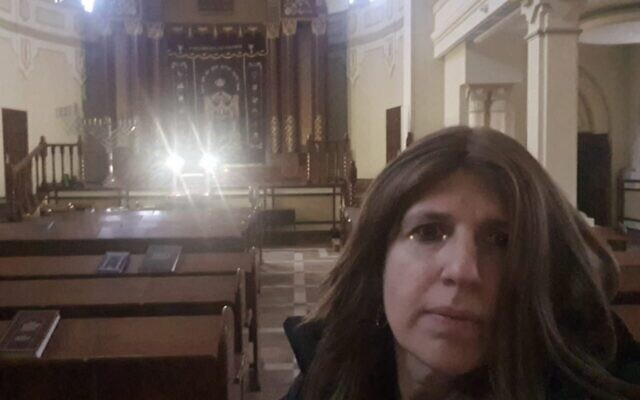 It says that on Shabbat you are not supposed to cry, this Shabbat I can’t even count how many times I failed.

But let me first share how much has happened this past week.

Last Sunday morning we heard that the Russian tanks had entered Kharkov. The bombings were getting louder and everyone in Kharkov were ordered to stay at home. A Russian tank was blown up next to the synagogue and shootings could be heard throughout the city. After a big battle the Russian forces were out of the city and we hoped we would now have quiet.

The curfew was lifted for a few hours and I managed with my husband and my children to get to the synagogue to deal with the thousands of calls and messages of people desperate for food, medicine and how to escape from the city. The whole day people streamed into the synagogue to move into the basement. A place where they knew they would get food and shelter and a feeling of togetherness.

Tuesday morning at 8am we heard a gigantic boom.

The government building on the Freedom Square was bombed and a few minutes later we heard an explosion. The whole house shook as we huddled together in our basement where we have been living for a week. Close. Very close. The street is full of smoke. We sneak outside to see the fire engines. A direct missile strike two doors from our house. Very close.

The whole day aerial strikes rain down on the city.

As we once again go to the synagogue, the sound of explosions, rockets and shooting in background the tragedy becomes bigger. More people trapped without food and medicine and water. Our brave driver goes to bring hot food to the 95 year old man on the sixth floor. The Israeli family that were five days in the underground subway station finally moved into the synagogue. The phones keep ringing. The heart breaks as we know we can’t help everyone. We make it home just as the curfew starts. Our beautiful city is being destroyed. Lives are lost.

Desperate for the miracle we have been praying for.

An explosion. Our kindergarten and school has had all its windows and doors blown out. Our school, where just a week ago we celebrated 30 years since its opening.  With 400 happy children with balloons and flowers. In the same dining room where they sang “Oseh Shalom”(He should make peace) there was now glass and destruction.

Wednesday morning we realise we have to leave with all the other ten families from Kharkov to a nearby city of Dniepr. From there we will continue to help Kharkov.

We pack up our lives of the past 32 years into 3 suitcases. Trying to decide what we need …what we could live without.

The morning bombings start again but I go with my husband to the synagogue.

I go down to the basement where everyone is sleeping on mattresses on the floor. I tell Ola the cook that we will be back soon. We cry. I really want to be back soon. My husband goes up to kiss the curtain of the Aron Kodesh. To let Him know that we are coming back. This synagogue where just a month ago we celebrated our daughter’s wedding with 500 people. This synagogue which was closed for seventy years under Communist rule and was used as a sports complex. This synagogue has to keep its light burning…

We leave our home. No time to deal with all the emotions. As we hear explosions and bombings in the distance we get in the van. We drive out of Kharkov and see all the damage. Heartbreaking.

“Repeat after me…” I tell my children and grandchildren. The prayer for a safe trip ‘tefillat haderech’. I add the line “vetachazireinu leshalom”(and to return in peace) with tears. So want to return.

In Dniepr we are treated like kings thanks to the community and have our first night sleep without any bombings.But we realise the next day we have to move on.

We travel for over 24 hours through checkpoints and borders till we arrive in Kishinev where we stay for Shabbat.

We are used to being the ones who are giving. Now we are the ones on the receiving end,thanking the Chabad shuchim(emissaries) of Kishinev for their hospitality.

Last week in Kharkov
This week in Kishinev
The tears?

Sitting at the Friday night meal together with over a hundred other Jews young and old from all over Ukraine. All so unsure of their future. All so wanting to be home.

And the tears flow when I see my fellow shluchim, the families who have worked side by side with us all these years to build our beautiful community known for its unity and warmth…who could not bring themselves to leave Kharkov behind…and now we are all going to different corners of the world…”vetachazireinu lesholom”…we will return.

As one by one the men and boys say the Hagomel prayer(the prayer said when getting out of danger)…everyone in unison said Chazak chazak venitchazek…we should all have strength.
And as all the women and girls joined to make a Shabat Kalla for the bride whose wedding was supposed to be next week in Kiev and is on hold till she can fly to New York we sang and sang.
And everyone was in tears as the young daughters of the shluchim in Summy sang the song they sang all week when they were scared and frightened from the bombing and the difficult journey out of their city..”I believe in Hashem, I trust in Hashem…” and as my young daughter sang the famous song “Abba”…’bamilchamot shomer aleinu'(In wars He guards us)

And the moments we couldnt capture.

The dance to “vesomachto vechagecha”(and you should rejoice on your festivals). “What is the chag? What is the festival here?” a surprised journalist asked my husband. “A chassidic Rebbe’s son wanted a candy so he made the blessing so that his father had no choice and gave it to him. So too we are celebrating already so Hashem will give us what to celebrate for”

Over one thousand messages waiting…asking to save their relatives, to send someone food, to make sure there is enough food in the synagogue to feed all those who come, to arrange the evacuation buses…Kharkov.We will be back

The Lubavitcher Rebbe’s message of a little light dispelling the darkness is needed more than ever before. Bombing the world with good deeds, with the lights of Shabbat candles, with a prayer, tefillin, charity and kindness. The light will outshine the darkness.

As we board the plane to Israel we pray that today we will be joined by all of the Jewish nation with the coming of the final redemption where there will be no wars and suffering.