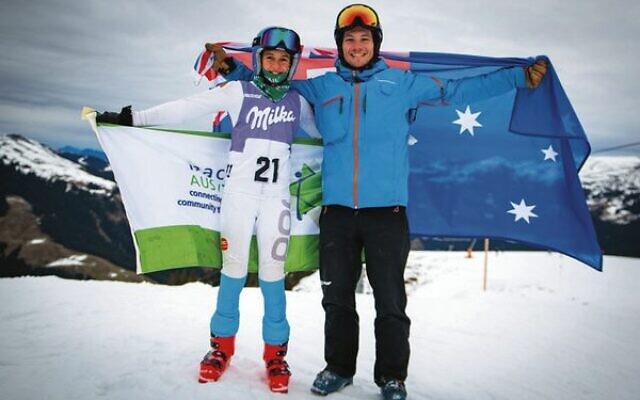 ETHAN Andrews Zucker hopes there’s a bigger Maccabi Australia delegation at the next Winter Games after he was the country’s sole representative at the Makkabi Deutschland Winter Games, held recently in Ruhpolding, Bavaria.

The Sydney teen, who is just 14 years old, narrowly missed out on a medal finish – placing fourth overall across his events.

Cheered on by his parents Ben and Gina, younger brother Jonathan and cousins from Israel, Andrews Zucker competed against male athletes of all ages in alpine skiing slalom, parallel slalom, and super-G, plus snowboarding parallel slalom and slopestyle.

“The Makkabi Deutschland Winter Games was such a great experience,” Andrews Zucker told The AJN.

“It was a very fun atmosphere and to meet other Jewish people who love their snow sports. Training before the race with my Australian coach Felix Ortner, who is actually from Austria, was really helpful to prepare for the competition. Overall I placed fourth in all events, which I am really excited about.

“I’m looking forward to the next Maccabi Winter Games, which will be in 2025 in Sun Valley, Idaho, USA. It would be cool to have a big Maccabi group to send to the 2025 event from Australia.”

As the lone Aussie there, Andrews Zucker was thrilled to take on the flag-bearing duties during the Opening Ceremony in Bavaria.

“On the opening night I was filled with excitement for the Games,” he said.

“It was very cool walking across the stage in front of a huge crowd with the Australian and Maccabi Australia flag.”

It was Australia’s debut in what is effectively only the third Maccabiah Winter Games ever held, and the first to be hosted in Germany.

The last time it was held was 85 years ago in pre-war Czechoslovakia when 2000 athletes from 12 nations participated.

Hosts Makkabi Deutschland describe the occasion as “a tradition being revived, with a signal effect far beyond the borders of Makkabi [Germany]”, and a historic event to be filled with “life, sport, and Jewish self-confidence”.