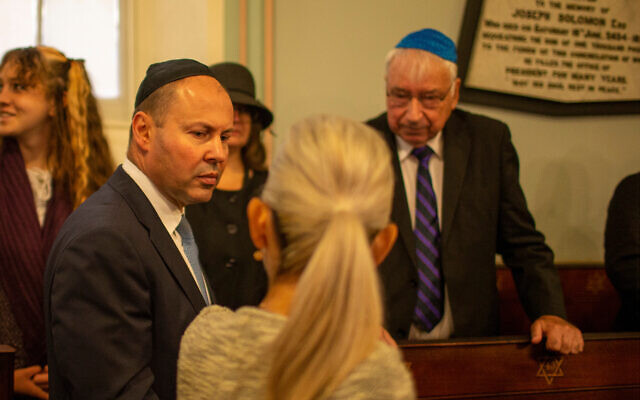 “THE scale of the death and destruction must never, ever be forgotten,” an emotional Josh Frydenberg said this week as he announced that the Morrison government is providing $2 million towards the establishment of a Tasmanian Holocaust Education and Interpretation Centre.

Speaking on Tuesday at Hobart Synagogue, Australia’s oldest shule, Frydenberg noted, “If there was a minute’s silence observed for every Jewish life that was lost in the Holocaust it would go for 11 years.”

The Treasurer said the new centre – which will allow Tasmanian students, teachers and the wider community to better understand the Shoah and its impact on our world – will also serve as a warning that such atrocities can still take place.

“I still can’t fathom how the German people, so cultured and educated, with Mozart and Wagner and many other distinguished names you are familiar with, could descend to such inhumanity to their fellow man,” Frydenberg said.

“But what it does remind me of is that it can happen again.”

Posted by The Australian Jewish News on Tuesday, March 2, 2021

Choking back the tears as he spoke from the bimah, Frydenberg hailed the establishment of the new Holocaust centre. “This is an example,” he said, “of what we can do to ensure that future generations say ‘never again’.”

Noting that the federal government has committed funding, in partnership with respective state governments, for the construction of similar centres in Victoria, South Australia, Queensland, Western Australia and the ACT, federal Education Minister Alan Tudge said, “We must never forget the tragedy of the Holocaust; we must never forget the evil that underpinned it and the ideology which caused it.

“Every student should learn about this so that it is always part of our collective memory.”

Stating the Tasmanian government will support the project with a financial and in-kind contributions, Tasmania’s Attorney-General Elise Archer – who joined a number of other local politicians including Senator Eric Abetz at the shule – said the centre would “provide a tangible way for our community to reflect upon this incredibly tragic period in world history”.

Noting it would “serve as a reminder of the importance of fostering and celebrating a respectful and diverse multicultural society”, she added, “We look forward to working collaboratively with representatives from the Tasmanian Jewish community to develop and progress this important initiative.”

Among those who spoke at the shule on Tuesday was 83-year-old Holocaust survivor Felix Goldschmied from Launceston, who was just a small child when his father was put in a labour camp after Germany occupied what was then known as Czechoslovakia.

He came to Australia in 1948 as a nine-year-old with his younger brother.

“I was only a child and I didn’t comprehend all the ins and outs of what was going on, but I knew that we were being discriminated against in a horrible way,” Goldschmied recalled.

“My parents were sent to a concentration camp and my family was decimated.”