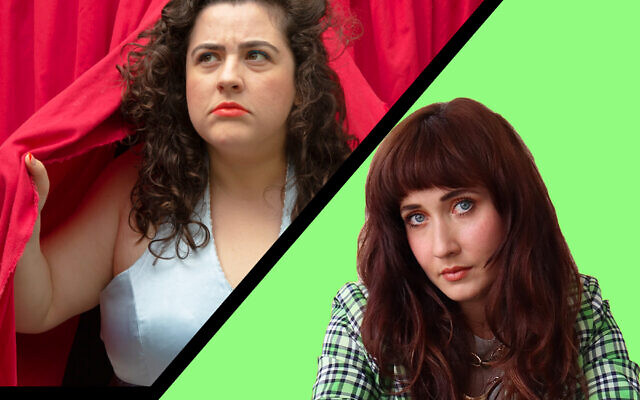 For Jess Fuchs and Thalia-Joan, comedy comes from within. Growing up in Jewish homes, attending Jewish schools and embracing their Jewish identities, Jess and Thalia-Joan use their life experiences as inspiration for their comedy acts. Even their interview with The AJN is filled with witty quips about how they came to love comedy, what their acts are about and why female representation in comedy is so important.

For example, Thalia-Joan writes, “Once I saw an old drunk woman getting kicked out of a pub and as she crossed the road, she made eye contact me with and said, ‘Do what you love even if it hurts you’. I assume she was referring to drinking, but for me that was making people laugh and here I am getting kicked out of a comedy club writing this interview.”

For Jess, she believes people who sit outside the norm are always funnier.

“My sister is a doctor, she said that’s true. She absolutely did fact-check this,” she joked.

You can’t help but laugh reading the responses from both ladies, which bodes well for their upcoming comedy appearances.

For both Jess and Thalia-Joan, performing at the Melbourne International Comedy Festival (MICF) is a dream come true.

They refer to their opportunity as “surreal and exhilarating” and a “career milestone”.

The split stand-up show sees 30 minutes from Thalia-Joan presenting Ex-pectations and 30 minutes from Jess with Dream Bat Mitzvah. The shows explore themes of growing up, Jewish culture, community and, as Jess puts it, “stepping into one’s femaleness”.

Female representation is a key point for both Jess and Thalia-Joan. When asked why it’s so important in comedy, they refer to the fact that many people still believe women can’t be funny.

“The number of times that I have been introduced at a show as being funny “for a woman” is reason enough,” Thalia-Joan said. “I believe humour and comedy has a profound ability to empower people in a social sense, and without female representation in comedy, women will not experience this.”

This sentiment is echoed by Jess, who said, “Women are 50 per cent of the population, we’re out here, we’re living, we’re eating snacks in bed, we’re tripping on a curb and pretending like no one saw it. We still exist in a world where a woman walks on stage and people disengage.

“I’ve seen so many painfully unfunny men, but their entire gender doesn’t get reamed for it. When more perspectives are represented, we learn empathy and understanding, because when you watch a comedian tell a story, and they share a part of themselves, or you connect with something they went through, that is magic.”

So, what can you expect from their shows? According to Thalia-Joan, “serious laughter”. And according to Jess, “unique stories that are beautifully relatable”.

“After two-plus years of ups and downs with live theatre, comedy and performance, it’s such an honour to entertain people,” she said.

“Bringing upbeat, fun, ridiculous stories to a packed house and giving people something to laugh and smile about for days after is such a privilege. The opportunity to chase a career like stand-up comedy does not weigh lightly on my shoulders; for me, making you laugh is very important.”