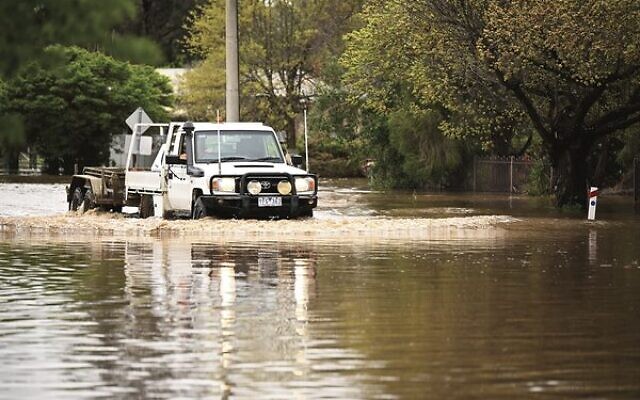 RETIRED Supreme Court of Victoria justice Howard Nathan, a Country Fire Authority (CFA) volunteer, was at his property in Mia Mia in central Victoria in the early hours of Sunday morning when he received a call for help, with rising floodwaters engulfing the area.

Although the property at Mia Mia near Castlemaine – where Nathan, a Temple Beth Israel congregant, has been living for more than 20 years – was spared flooding, he was asked to patrol a nearby bridge over the Campaspe River and redirect traffic away from hazardous floodwaters.

Nathan and his partner Ned Upton, both CFA volunteers, heard a CFA alarm in their house, and a two-way radio message alerting them to a nearby emergency. At first, they thought a house might have caught fire due to an electrical fault. But they were asked to assist the CFA in its joint effort with the State Emergency Service to secure areas affected by the flooding.

“We were called at 1am to help with guarding the bridge over the Campaspe, which is adjacent to our property, and to prevent traffic from passing over, because the platform of that bridge was about 10 centimetres under the water,” Nathan told The AJN.

Nathan said the river level in the Campaspe near his property was 10-12 metres above its usual level. Nathan and Upton were asked to patrol the bridge between 2am and 3am.

Braving the chill “was well worth it because we had three vehicles in that hour that tried to cross”, said Nathan. “Two were loaded with young people who had been out for a party somewhere.”

One of the cars was driven by a young male “full of bravado”, who initially resisted Nathan’s entreaties to turn back and said he could manage driving through the floodwaters. Nathan told him he was not only endangering his own life, but that of a female passenger in the vehicle. “She fortunately spoke up and said, ‘No, no, let’s turn around,’ and that convinced him.” Another driver “didn’t need much convincing to go somewhere else”.

Nathan said nearby Lake Eppalock was so full that water was lapping at the road edges. “I’ve never seen that in the 20 years I’ve been here,” he said. He is expecting renewed flooding this weekend, as river levels rise again.

A member of Goldfields Progressive congregation Kehillat S’dot Zahav, Nathan said a community Succot event at the home of congregants Bruce and Fran Sokol near Bendigo had to be cancelled because water had swamped their yard. “You couldn’t walk on the ground.”