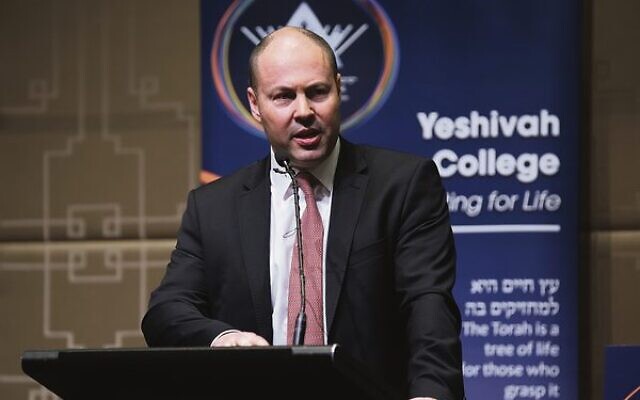 FORMER federal treasurer Josh Frydenberg has taken a senior job in the private sector, joining top-flight investment bank Goldman Sachs, after losing his Parliamentary seat in the May federal election.

Before the election, when the talk was about Frydenberg as possibly the next Liberal leader, or perhaps even PM, he was quizzed by The AJN on his options “if things don’t go to plan for the government”. At the time, he said, “I’m very focused on winning my seat, continuing as Treasurer.”

But not only was the Morrison government defeated, ‘teal’ candidate Monique Ryan snared his previously blue-ribbon Liberal seat of Kooyong. Ever since, speculation had been buzzing about what Frydenberg, who has just turned 51, would do out of Parliament.

Now the 2018-22 Australian treasurer has taken on the role of Asia-Pacific senior regional adviser for Goldman Sachs.

Contacted by The AJN this week, Frydenberg reflected, “In my new role at Goldman Sachs I am really looking forward to working with leading corporates as they navigate a very challenging global economic environment.”

Goldman Sachs Asia-Pacific president James Sneader said, “We are fortunate to bring to Goldman Sachs a person of Josh’s deep public and private sector experience, connectivity and insight. His significant understanding of geopolitical and economic issues will bring considerable value to our clients across the region and beyond.”

Frydenberg brings depth to his new role, having worked in investment banking for Deutsche Bank. Educated at Mount Scopus Memorial College, Frydenberg has law and economics degrees both with honours from Monash University, and has completed his articles of clerkship at law firm Mallesons Stephen Jaques. He holds a Masters in International Relations from Oxford University and a Masters in Public Administration from Harvard.

Embarking on a career in politics, he worked as a senior adviser to former PM John Howard. Entering Parliament after his election to Kooyong in 2010, he served as environment and energy minister; resources, energy and northern Australia minister; assistant treasurer; and Parliamentary secretary to the PM after the 2013 election.

In 2018, when Scott Morrison became PM, Frydenberg was elected deputy Liberal leader and was appointed as treasurer.