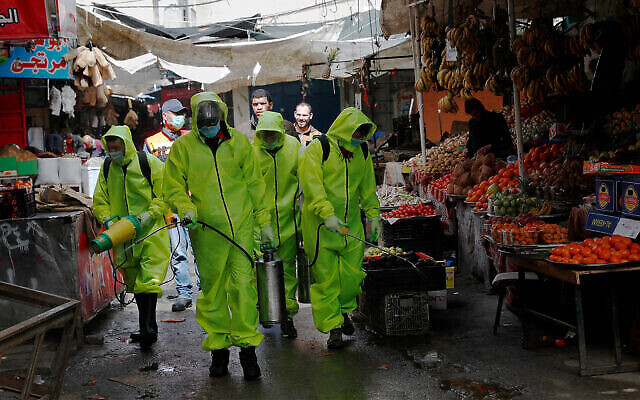 AUSTRALIAN and international apologists for Hamas and other Islamist groups operating in the Gaza Strip are exploiting the COVID-19 pandemic to launch a propaganda campaign against Israel under the guise of humanitarian concern for the people of Gaza.

Groups like the Australian Palestine Advocacy Network (APAN) claim that Israel – as the “occupying power” – is responsible for Gaza’s health system, and demand that it lift its blockade of the Strip to allow the inflow of much-needed medicines and equipment.

The aims of this campaign are twofold: 1. To use the coronavirus pandemic as a pretext for pressuring Israel to end its blockade of Gaza, something these groups have sought for many years; and 2. To distract from the criminal neglect of the local health system by Hamas and the Palestinian Authority (PA), and prepare to shift the blame onto Israel should catastrophe strike as a result of that neglect.

Following the Oslo Accords it is the PA that is responsible for purchasing and supplying medicines and medical supplies for Gaza. However, due to internal Palestinian divisions it has severely neglected to do so.

The poor situation of Gaza’s health system in general is of course undeniable, as is the potential for a disaster were coronavirus to take hold there.

Yet this campaign opportunistically resorts to the usual fictions to vilify Israel, avert attention from the Palestinian leadership, and absolve the latter of responsibility and deny it any agency. Though professing concern for the welfare of Gazans, the campaign fails to question why, despite receiving billions of dollars in international humanitarian aid, Gaza’s critical infrastructure including hospitals and medical facilities has been deprived of funding. It ignores the misappropriation of humanitarian aid, and the very tangible evidence of this in the shape of rockets, incendiary devices and terror tunnels that are used to attack Israel.

Israel does not occupy and has no presence in the Gaza Strip, having disengaged in 2005. After bitter in-fighting between Fatah and Hamas the territory has been governed by the latter since 2007. Claiming Israel remains the “occupying power” responsible for looking after Gazans is absurd.

Also illogical are claims that Israel is withholding assistance to Palestinians. As an Israeli official put it, “Bacteria and viruses do not stop at the border and the spread of the dangerous virus [to Palestinian territories] can also jeopardise the health of the residents of Israel.”

Myths and facts about the blockade

Israel’s blockade is a response to the aggression of Hamas and other Islamist groups, and aims at preventing the smuggling in of weapons, materials for constructing terrorist infrastructure – and terrorists. On this, or the fact that Egypt also imposes a blockade on its border with Gaza, Israel’s critics are mute.

The blockade has never applied to medicines, or most medical equipment apart from a few with dual-use military purposes, mainly X-ray machines.

According to the IDF’s division for Coordination of Government Activities in the Territories (COGAT), between March 15 and April 11 Israel sent 7687 truckloads of supplies into Gaza, including 903 tons of medical supplies. Examples are:

Comprehensively undermining APAN’s latest disinformation campaign is a statement from the UN, a body notoriously hostile to the Jewish State, which praises the “excellent” coordination between Israeli and Palestinian authorities in reacting to the pandemic and helping contain its spread.

Nickolay Mladenov, the UN Special Coordinator for the Middle East Peace Process, noted that Israel had allowed the entry of critical supplies, equipment and medical personnel into Gaza.

Gazan leaders, meanwhile, continue as before, threatening Israel even while the pandemic rages.

On March 27 a rocket attack was launched at Israel from Gaza.

A few days later Hamas leader Yahya Sinwar threatened the mass murder of Israelis if Gazans had insufficient ventilators, while simultaneously embracing anti-normalisation: “As for the question about whether we need them to give us anything – we don’t need anything from the occupation … But I say this loud and clear: God forbid, if a time comes when we have no choice but to watch our citizens breathe their final breaths, and when there are no ventilators – I say to [Israeli Defence Minister Naftali] Bennett that we will make six million Israeli settlers unable to breathe.”

Rather than seek cooperation to improve the welfare of their people, Hamas and other groups choose to escalate tensions, thus giving Israel yet more good reasons not to lift the blockade. Meanwhile, their supporters look the other way and continue blaming Israel.

Judy Maynard is a policy analyst at the Australia/Israel & Jewish Affairs Council.