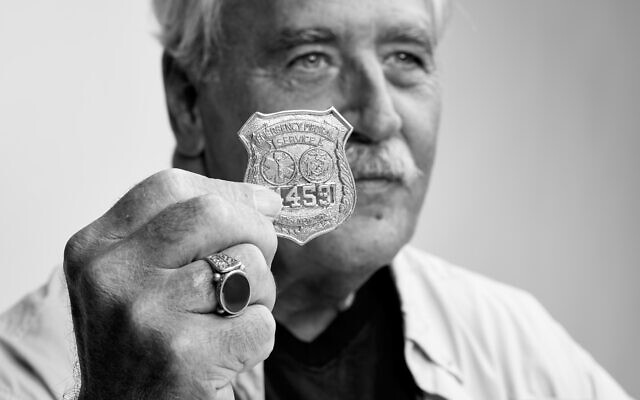 A family member shows the artefact he brought in from his loved one.

He started his professional career in the film and television industry. But, as he explained to The AJN while chatting at the studio where he’s currently shooting a new project, he was told to get a hobby by his darling wife Sandie. That hobby has turned into a passion. And he’s using that passion to share stories of resilience, strength and tolerance – and why we all need a bit of these to change the world.

It was a deeply emotional tour of Ravensbruck and Sachsenshausen concentration camps near Berlin back in 2018 which Wiesel says inspired him to share such personal stories. During that trip, he was on a mission to capture images of personal items that once belonged to inmates.

Most recently, he shot an exhibition around 9/11 first responders. The images were captured during a series of interviews in New York City during 2019 and 2020, and were exhibited at the New York City Fire Museum to coincide with the 21st anniversary of that fateful day.

Exploring the social dimensions of trauma, and the resilience and strength of trauma survivors, Wiesel said shooting the exhibition showed him just how tough people can be.

“They’re out there, they’re talking about their experiences, they’re sharing,” Wiesel recalled.

Wiesel asked each person to bring an artefact in with them, something that was special to them and their loved ones. They shared a conversation as Wiesel snapped some photos. The interview accompanied the photo in the exhibition.

“We kept it very simple, I had a black and white canvas, brought the subject in the centre of the frame, so that they’re talking to us,” Wiesel said. “What we’ve captured is their expression and their voice, and the voice of the loved ones they lost.”

For Wiesel, it definitely gave him some perspective “of what’s important and what isn’t important … getting upset because you’re in the wrong line in the supermarket, or your lane in the car is moving slower than the lane next to you, not so important. And these people get up, and they get on with it, every single day. It’s been 21 years; it’s just fascinating to see how people cope”.

Wiesel said that the experience was a cathartic one and deeply moving. When asked why they came, Wiesel explained that most (if not all) of the people he spoke to said they wanted to document everything, especially so that the moments and the memories aren’t lost.

“Then I realised that there’s a whole generation of people who weren’t even born when it happened,” Wiesel recalled. “We can’t forget. It needs to be documented, it needs to be reported and it needs to be told and learnt by the next generation, so that maybe there is some more acceptance and less bigotry in the world.”

Wiesel said that his hopes are that people are affected by the images.

“Through the language of photography, hopefully people looking at these photos go ‘wow’ and it affects them enough that they go
and share it with someone else, and that person shares it with somebody else.

“I just want people not to forget what happened 21 years ago. It’s easy to move on, 21 years is a long time. But I want people to understand why it happened and what we need to do so it doesn’t happen again.”

As Tara Feinberg – whose father Alan, an FDNY member, died while rescuing others – said, “It all happened, but we need to be better, and we have to do better.”

For more about Richard Wiesel’s upcoming projects and to view the images from One Day in September, visit richardwiesel.com