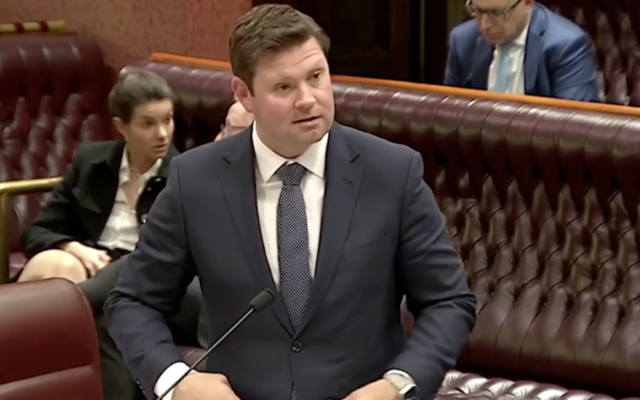 PARLIAMENTARY Friends of Israel chair Scott Farlow (pictured) spoke out about the rise of antisemitic bullying in schools during an address in the NSW Legislative Council last week.

Referring to the recent high-profile antisemitic incidents at both Knox Grammar School and Cranbrook School, Farlow described the reports as “sickening and incredibly disturbing”.

“Of particular concern is the antisemitic propaganda that was spread through a forum of 150 impressionable teenage students, which showed a repulsive adoration of one of the most evil and vile figures in human history –Adolf Hitler,” Farlow said.

“Knox Grammar School is not the only school facing insidious and vile attitudes towards our Jewish community, with media reporting that Cranbrook School has been infiltrated with students depicting Nazi salutes and fellow students being called dehumanising antisemitic tropes. It is so troubling that I will not repeat those expressions in this setting.”

Farlow also mentioned how disappointed he was to hear of the abuse Holocaust survivor Olga Horak’s grandson suffered, and he shared his own account of witnessing antisemitism firsthand.

“More than 20 years ago when I was at school, my teacher asked if anyone in the class was Jewish,” Farlow said.

“I innocently responded and identified my friend as being Jewish. Following the class, my friend was set upon by two fellow students and assaulted, with him later telling me, ‘This is why I don’t tell people I’m Jewish.'”

Farlow emphasised the importance of education in ensuring the horrors of the past are never repeated, and he urged schools and students to meet Holocaust survivors and visit the Sydney Jewish Museum.

He said it was “constructive” to see Knox Grammar take up the NSW Jewish Board of Deputies’ offer to visit the museum.

“I remember the impact that visiting the Sydney Jewish Museum as a school student had on me,” Farlow said.

“Meeting Holocaust survivors developed my understanding of the horrors of the Shoah and the need to ensure that such atrocities never happen again. By enhancing Holocaust education in our schools, surely we can make an impact in turning the tide on rising antisemitic abuse.”

NSW Premier Dominic Perrottet announced this week that government will appoint a chief behaviour adviser, who will be tasked with improving behaviour in NSW’s public and private schools.