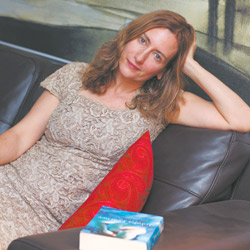 THE Antikythera mechanism is the oldest known, complex, scientific calculator. The first-century ancient bronze device was discovered in 1901 and was so scientifically advanced that a remotely similar device only appeared 2000 years after its creation. Its true purpose still remains a mystery.

It’s no surprise then that this mysterious mechanism captured the imagination of UK-born author Tobsha Learner and inspired her most recent novel, Sphinx.

Learner, who was a sculptor before she turned to writing, has carved her name in the literary world by exploring the mythical and supernatural in her novels.

The thriller, set in Alexandria, Egypt, is based around the ancient device, which Learner has fictionalised and added mysterious and dangerous powers to.

Learner’s wariness of romanticism surrounding ancient Egypt drew her to the idea of setting Sphinx in Alexandria in 1977 -— a very significant time in the region politically -— post-Gamal Abdel Nasser, post-colonial, in the remnants of an elite community that had gone through a revolution.

“In the process of researching Nectanebo II [the last real Egyptian pharaoh who mysteriously disappeared] and being in Egypt for some of the research, I think what interested me most was the curious and extraordinary blend of totalitarianism, religion, worship of the natural world in a mystical context that was ancient Egypt,” Learner explains.

“I also now believe there are archaeological discoveries that we haven’t yet been able, or perhaps willing, to explain.”

The book follows Oliver, a geophysicist expert in oil exploration whose young wife Isabella, a marine archaeologist, drowns while diving and searching for the astrolabe she had devoted her life to finding. The ancient artefact unwillingly sweeps Oliver into a world of political and mystical sabotage.

The book is laden with an extraordinary amount of research into ancient Egypt, which involved Learner spending two months living in Egypt interviewing people, taking photographs and getting a sense of the atmosphere. These details come through arrestingly in the book, which is written with a balance of description, historical facts and scientific jargon.

What is immediately striking about Learner’s writing, which also includes Tremble and Soul, is her superior facility for imaginative re-interpretation of historical events and mysteries.

Prior to Learner’s foray into writing, she was a sculptor, working mainly with marble as an apprentice to the Jewish sculptor Joel Elenberg in Carrara, Italy.

“Marble does not become beautiful until the very final stages when you begin polishing it and the smashed crystals become translucent,” she says, using the technique as a metaphor to explain her novels.

“In this way I tend to polish and polish my drafts -— driving both my editors and myself crazy,” she laughs.

So when she writes, does she think like a playwright, an artist or a novelist? “I think I structure the writing process like a playwright or screenwriter,” she says, and references Paul Thompson, who ran the playwrights’ studio at the National Institute of Dramatic Art, as one of her mentors.

“The sense of space and physical tension between characters, visual setting, sound, smell and taste also come into play. I like to create as visceral an experience as possible for the reader.”

Well known in Australia as a playwright — she spent seven years living in Melbourne and six in Sydney -— Learner was in the country for the Brisbane Writers Festival.

It was a much-anticipated visit for her strong following Down Under, with her last play performed in Sydney in 2004. But her fans won’t have to wait much longer.

Her short play Black Wedding will run at the Old Fitzroy Hotel, Woolloomooloo in Sydney from October 24 to December 19. It forms part of The Ghost Stories, a series of short plays by young and established playwrights to be performed at locations around Sydney.

Learner’s setting is Mortuary Station, the old platform for loading coffins bound for Rookwood Cemetery in the 19th and early 20th century.

She is also writing Esther, a radio play for the ABC set in the years 1787 and 1829, which is about the life of Esther Johnston (nee Abrahams), the convict Jewish wife of George Johnston, the lieutenant-governor who deposed William Bligh in the rum rebellion of 1808.

These days, Learner shares her time between London, Sydney and California and jokes that she has “become an amoeba mutating according to which Petri dish I’m sitting in”.

“There are elements I deeply love in all three countries, but I’m most at home sitting at a table with my family — which is usually in London or Melbourne.”

The name Tobsha is Yiddish for “little dove”. Learner was named after her paternal grandmother, and paired with her surname, it seems most apt for the intriguing writer.

Born and raised in England, Learner excelled in English, art and drama. Always a high achiever, Learner wrote her first opera at the age of nine.

“Just goes to show what a pretentious brat I was,” she jokes. “I was a huge reader; it was an escape for me and I was heavily into the Greek myths.”

That early love of mythology and the desire for escapism is reflected in her work, as are recurring themes of displacement and the search for identity. In Witch, the central couple, a Jewish woman and a Catholic man, live in a time of anti-Semitism and the Inquisition. Her preoccupation with the migrant experience seems to stem largely from her Jewish background.

“Certainly displacement and search for identity have been [a part of] my family’s history on both sides,” she says.

Her paternal grandfather was Polish-Jewish, with her great-grandfather having migrated from Poland to London and then to Stoke.

Her mother’s Polish-Jewish father was from Moganitza, a shtetl near Warsaw, and her maternal grandmother was from near Stolin in Belarus. They met in what was then Palestine and left for Perth in 1938. Her grandfather, who ran one of the first bakeries on Melbourne’s Acland Street, lost the majority of his family during the Holocaust.

Both sets of grandparents were very influential in Learner’s early-to-teenage years, particularly after the tragic death of her father, when she was 16.

“It was a terrible shock as he was a young man of 40 who died in a motorcycle accident. One of the hardest things about sudden bereavement, in what was basically a fairly atheist, secular household, is the lack of ritual or belief to console,” she laments.

“Add to that a very wild and strong-willed 16-year-old and you begin to understand the impact.”

Perhaps it is that experience that led Learner to identify herself as spiritual rather than religious. “If anything, I find the unexplainable in physics, science and astronomy the greatest source of wonder.”

And if Sphinx is a marker to go by, it’s clear Learner can inspire even non-believers to ponder the mysteries of science and astronomy that sometimes incongruously emerge in the fabric of history.