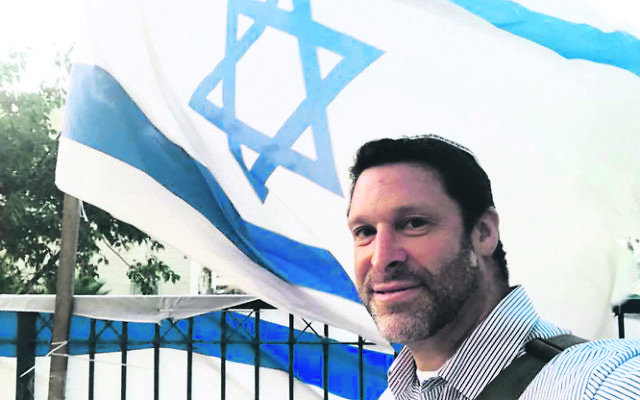 MOMENTS after Ari Fuld was stabbed on Sunday night in Gush Etzion, in an attack that was to prove fatal, he rose to his feet, jumped over a fence, drew his pistol and shot the terrorist who had knifed him to prevent further innocent Israelis being assaulted.

Fuld, a father of four who died shortly afterwards from his wounds, is being mourned by members of the Australian Jewish community who met him both here and in Israel, and who remember him as a true hero of the Jewish nation.

A prominent Israel advocate, the 45-year-old dedicated his life to the country, creating videos and Facebook pages to promote the Jewish homeland, and speaking to visiting groups. He also worked at Standing Together, a non-government organisation that provides support to Israeli soldiers.

Fuld’s wife Miriam said at his funeral that he always ran towards danger, and never backed down when he knew he was right.

“You fought for what you believed in,” Miriam told thousands of mourners.

“You’ve left behind a legacy for the entire world to savour, videos and stories that we will be telling for many years to come.”

March of the Living Australia (MOTL) co-president Renny Rychter said he was honoured to take the Australian MOTL delegation to hear from Fuld earlier this year.

“When I got the call about the attack I couldn’t believe it. He was just so strong and fearless like a lion,” Rychter said.

“In life you don’t get touched by a lot of people, but he was the sort of guy who touched you and changed your life.”

Rychter said it was an honour to have known Fuld.

“He was an incredible advocate for Israel in every way. He was so passionate. Every breath he took was not to be wasted in saying how amazing Israel was.”

David Adler, who hosted Fuld in Australia last year at a series of Australian Jewish Association (AJA) events, said that Fuld was one of the best Israel advocates he has ever seen.

“He was an incredible guy and what he did makes him a serious hero. To have mortal wounds and still go after the terrorist – he was a special person.

“His heroic last efforts could have contributed to his death.”

Noting that Fuld’s killer or the killer’s family would receive a monthly payment from the Palestinian Authority, the AJA urged “those who contribute aid to the PA which pays terrorists or to UNRWA which incites young Arabs to terrorism through the content of ‘educational’ material, to urgently stop doing so. This form of aid does not build peace, it builds terrorism”.

Dovi Meyer, who became close friends with Fuld when he made aliyah from Australia, attempted to phone Fuld as soon as he heard there had been an attack in the Gush.

“When I tried to call him I never could have expected he would be the victim of this attack,” Meyer told The AJN.

“He is my mentor and hero. I’m totally heartbroken and shocked.

“He paid the ultimate sacrifice stopping a terrorist who was on his way to kill others.

“I loved him and he was a huge role model to me, a real leader.

“If you are an active Zionist in Israel, you knew Ari.”

“I embraced them in the name of the entire nation in this time of terrible grief. We are alive thanks to heroes like Ari. We will remember him forever,” Netanyahu said.

Ari is survived by his wife and four children.