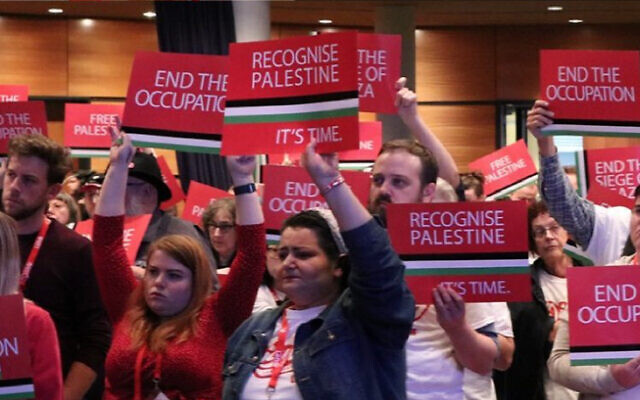 A MOTION passed by the Queensland branch of the ALP panning Israel’s “systematic injustices meted out to the Palestinian people” has drawn condemnation from leading Labor politicians and from the Jewish community.

At its state conference on Sunday, the branch congratulated the federal party for reaffirming the 2018 national conference resolution supporting “recognition of Palestine”.

It went on to condemn “the current violence and incitement in Jerusalem which was sparked by the forced evictions in Sheikh Jarrah to remove Palestinians from their homes and replace them with Israeli settlers, the shooting and tear-gassing of worshippers in the Al-Aqsa mosque”.

Referencing “the routine oppression and dehumanisation of Palestinian people”, the resolution also condemned “the ongoing Israeli annexation by stealth of Palestinian land, the ethnic cleansing of Palestinians through the expansion of illegal settlements, home demolitions, evictions, burning of land, crops and olive groves in the occupied Palestinian territories in contravention of international humanitarian law”.

Queensland Jewish Board of Deputies vice-president Jason Steinberg told The AJN the resolution “overflows with lies and is injected with a flavour that would have every antisemite in Queensland salivating”.

Australia Israel Labor Dialogue co-convenors Michael Borowick and Adam Slonim stated they were “extremely disappointed … Clearly Israel has a right to defend itself from attacks from Hamas, an organisation deemed a terrorist organisation by Australia”.

Zionist Federation of Australia president Jeremy Leibler said the resolution contained errors and mistruths, misrepresenting the Sheikh Jarrah issue, which he described as a highly complex legal process with legitimate rights and grievances on both sides.

In an effort to falsely paint Israel as an aggressor, it omitted that Palestinian rioters on the Temple Mount had stockpiled weapons in the Al-Aqsa Mosque, and were using it as a base to attack Jewish civilians and Israeli police, he added.

Leibler also said the motion would lead the public to question whether an ALP government could act as an honest broker between Israel and the Palestinians.

Labor Member for Macnamara Josh Burns conceded that the motion was “disappointing and blatantly one-sided”, but insisted, “it in no way represents federal Labor’s balanced policy in support of Israel and a two-state solution and it will have absolutely no impact on federal Labor policy”.

Shadow foreign affairs minister Penny Wong concurred, telling The Australian that blaming one side for the ongoing conflict “will not advance the cause of peace”.

Welcoming Wong’s “timely, principled intervention”, Australia/Israel & Jewish Affairs Council (AIJAC) executive director Colin Rubenstein told The AJN, “We call on other ALP figures to support genuine moves toward peace, and do more to rein in the unacceptable, destructive, one-sided statements and actions of the local party in that state and indeed, by too many other ALP members elsewhere in Australia.”