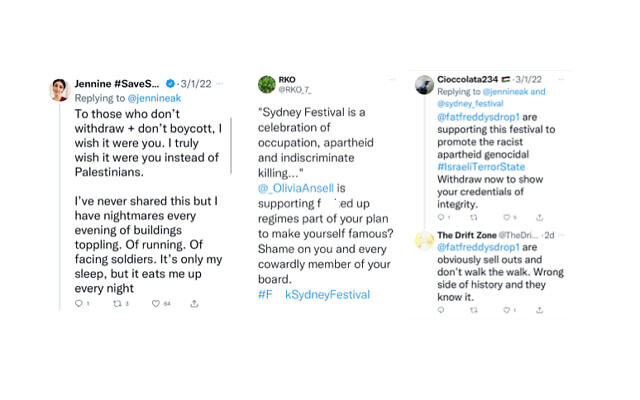 THE campaign of intimidation launched against the Sydney Festival has shone a light on the tactics of too many Palestine activists. These tactics should alarm progressives and Palestinian supporters everywhere.

The Sydney Festival includes a single Israeli act and, as is commonplace in these sorts of festivals, sponsorship by the relevant embassy or cultural organisation to help pay for it. This was enough for a coalition of Palestine activists to call for a boycott, and ludicrously claim that the festival had thus become “a culturally unsafe space for Palestinians, artists, organisations [and] Arabic-speaking communities”.

Worryingly, 30-odd artists heeded the call and withdrew. The Sydney Festival board took the high road, refusing to drop the sponsorship deal.

It shouldn’t need to be said that the boycotters’ selective outrage is completely hypocritical. Notwithstanding they’ve swallowed complete lies about Israel, they only boycott one country. None of the artists who withdrew, or the Palestinian groups calling for their withdrawal, have said a thing about the dire civil and human rights situation for Palestinians under direct Palestinian control in the West Bank and Gaza, or the status of Palestinians in Lebanon.

In Lebanon, Palestinians are banned from dozens of professions, cannot own property, receive few work permits and are barred from most government services, including health and education. The result is that Palestinians are forced to live in overcrowded Palestinian-only towns run by UNRWA and are almost completely reliant on it for services and employment.

It’s a situation akin to apartheid, but that word is reserved for Israel, in a sad example that lying constantly about something eventually convinces people that it is true. What seems obvious is that these boycotters are only interested in Palestinian rights when Jews are involved. There’s a word for that.

Although I think they are profoundly and wilfully ignorant, if these people want to boycott everything to do with Israel – and even call on others to do so – good luck to them. However, where they cross the line of acceptable behaviour is when they pressure those that don’t want to join them.

Attempts to silence people that defend Israel have been happening for a while – look to John Lyons’ recent book as a clumsy example. But it hit full throttle with the Sydney Festival, where not being a full-throated supporter of the boycott was enough to make you guilty of the thought-crime of tolerating Zionists.

One of the festival acts – the colourfully-named Tropical F**k Storm – issued a remarkable statement when it announced it was withdrawing from the festival. Their reasoning didn’t mention solidarity with the Palestinians, but because they and “hundreds of unwitting artists” had become “the targets of online harassment, bullying, smear campaigns, ridiculous accusations, misrepresentations and abuse from total strangers who have no idea what’s actually going on behind the scenes, what any artist’s position is or even what they’re talking about”.

A look through the social media mentions of the festival’s director will give a hint of the intolerable personal abuse hurled at everyone who is not 100 per cent on board with the boycotters. 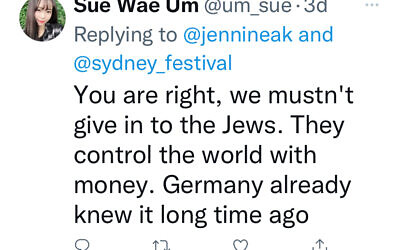 One of the tweets posted in the discussion of the Sydney festival.

Tropical F**k Storm blamed the festival organisers for accepting a sponsorship that would lead to this behaviour. But that’s like blaming a woman for wearing too short a skirt.

The aggressive behaviour this call for boycott unleashed should be alarming everyone, including those who desire genuine Israeli–Palestinian peace: Intimidating people into compliance is the road to disaster.

It is the behaviour of fascists and should be called out as such.

Consider the artists participating in the Sydney Festival. Regardless of whether they lean towards one side or the other, most would privately acknowledge that the Israeli–Palestinian dispute is complicated. But saying that out loud would unleash a torrent of abuse, and potentially cost them fans and ticket sales. So they keep their heads down and hope for the situation to blow over.

There is great cost and little reward for standing up against the intimidatory behaviour of these Palestine activists. Few artists have the economic or reputational ability to withstand this sort of pressure, which is why Nick Cave’s 2018 intervention is so important.

He was being pressured to drop an upcoming tour in Israel. He wrote a response that was highly critical of Israel, but also noted that boycotting Israel was both shameful and cowardly. My bet is that many of the acts at the Sydney Festival would broadly agree with Cave’s sentiments, but don’t have the fanbase to withstand the abuse that Cave subsequently suffered.

Were an arts writer to quietly approach all the acts that remain in the festival and ask them for some off-the-record accounts of the abuse they’ve received, I think the result would be revealing. I’m wondering – frankly, I’m hoping – that the bullying behaviour of the Palestine activists burned some bridges.

Not to delegitimise the Palestinian cause, but to give more political and cultural space to the many thousands of Australians – including Palestinian Australians – who found the stand-over tactics of the boycotters completely inappropriate and who want to offer their thoughts about the best way to achieve real peace. Let’s hear less from those advocating Orwellian tactics and more from the people they want to control.

In the meantime, the Australian arts community should loudly and clearly state that the behaviour we’ve seen is absolutely beyond the pale.

Australians from the left and right should join them. Not to defend Israel, or even to correct the lies told about it. But to make clear that in Australia, civil discourse is absolutely vital, and shutting out one side (any side!) is the road to authoritarianism.

Dr Bren Carlill is the director of public affairs at the Zionist Federation of Australia.