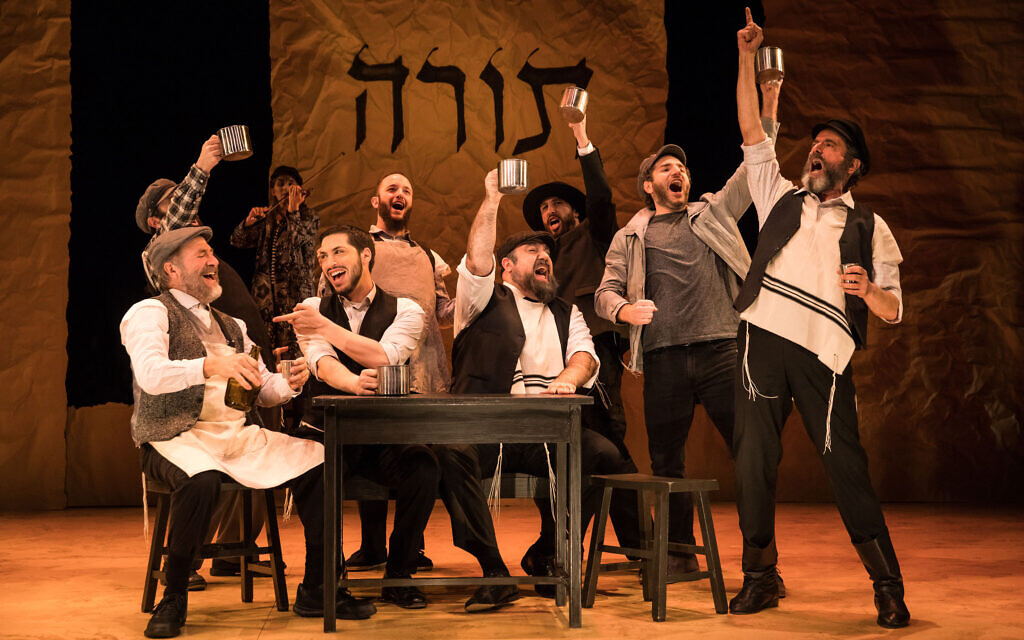 IN September A Fidler afn Dakh – Fiddler on the Roof in Yiddish – will have its Australian premiere at the Sydney Opera House, followed by a season at Melbourne’s Comedy Theatre starting in November.

One of the surprise off-Broadway hits last year, A Fidler afn Dakh is being staged by Opera Australia and leading producer John Frost – the team that presented hit musicals such as South Pacific, My Fair Lady and Evita in recent years.

At the helm is the creative team from New York’s National Yiddish Theatre Folksbiene led by director Joel Grey, who won a best actor Oscar for his role in the 1972 movie Cabaret.

The musical, based on the stories by Sholem Aleichem, was first staged on Broadway in 1964 by producer Harold Prince, directed and choreographed by Jerome Robbins from the book by Joseph Stein, music by Jerry Bock and lyrics by Sheldon Harnick. It won nine Tony Awards including best musical and ran for 3242 shows until 1972.

With hit songs such as Tradition, If I Were a Rich Man, Sunrise Sunset and Matchmaker, it is set around pious milkman Tevye, his wife Golde and their three daughters as their traditional shtetl life in Anatekva comes under threat from the modern world and the pogroms of czarist Russia at the turn of the 19th century. 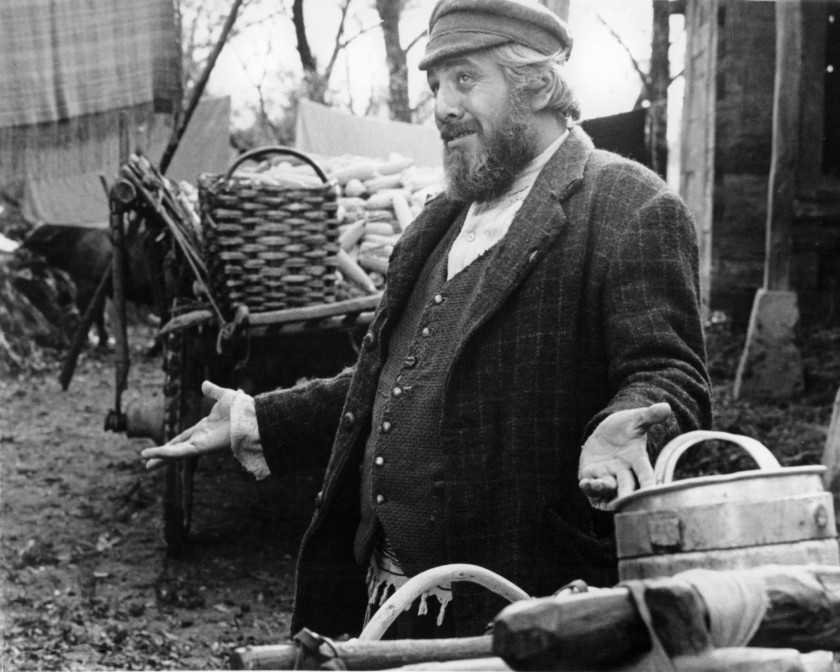 Israeli actor Topol as Tevye in Fiddler on the Roof.

Over the years it has been staged around the world, including Australian productions starring Topol (1998 and 2005) and Anthony Warlow (2016).

The National Yiddish Theatre Folksbiene originally staged A Fidler afn Dakh as part its 2018 summer season at the Museum of Jewish Heritage. It was scheduled to run for six weeks, but proved to be so popular that the season was extended four times and ran for six months until the end of 2018.

In February 2019 the musical transferred to the Stage 42 theatre on 42nd Street and after two in-season extensions ran for almost 400 performances until January 5 this year.

Under director Grey, the production featured an almost bare stage with minimal sets, with the focus on the words and music by the performers.

Last month in a Melbourne dance studio, the first auditions got underway under the eyes of the New York creative team of Zalmen Mlotek, artistic director of the National Yiddish Theatre Folksbiene for the past 20 years; choreographer Stas Kmiec, who also acted in more than 1000 performances of Fiddler on the Roof on Broadway; Merete Muenter, who has worked extensively with the National Yiddish Theatre and will be associate director on the Australian production of Fiddler. 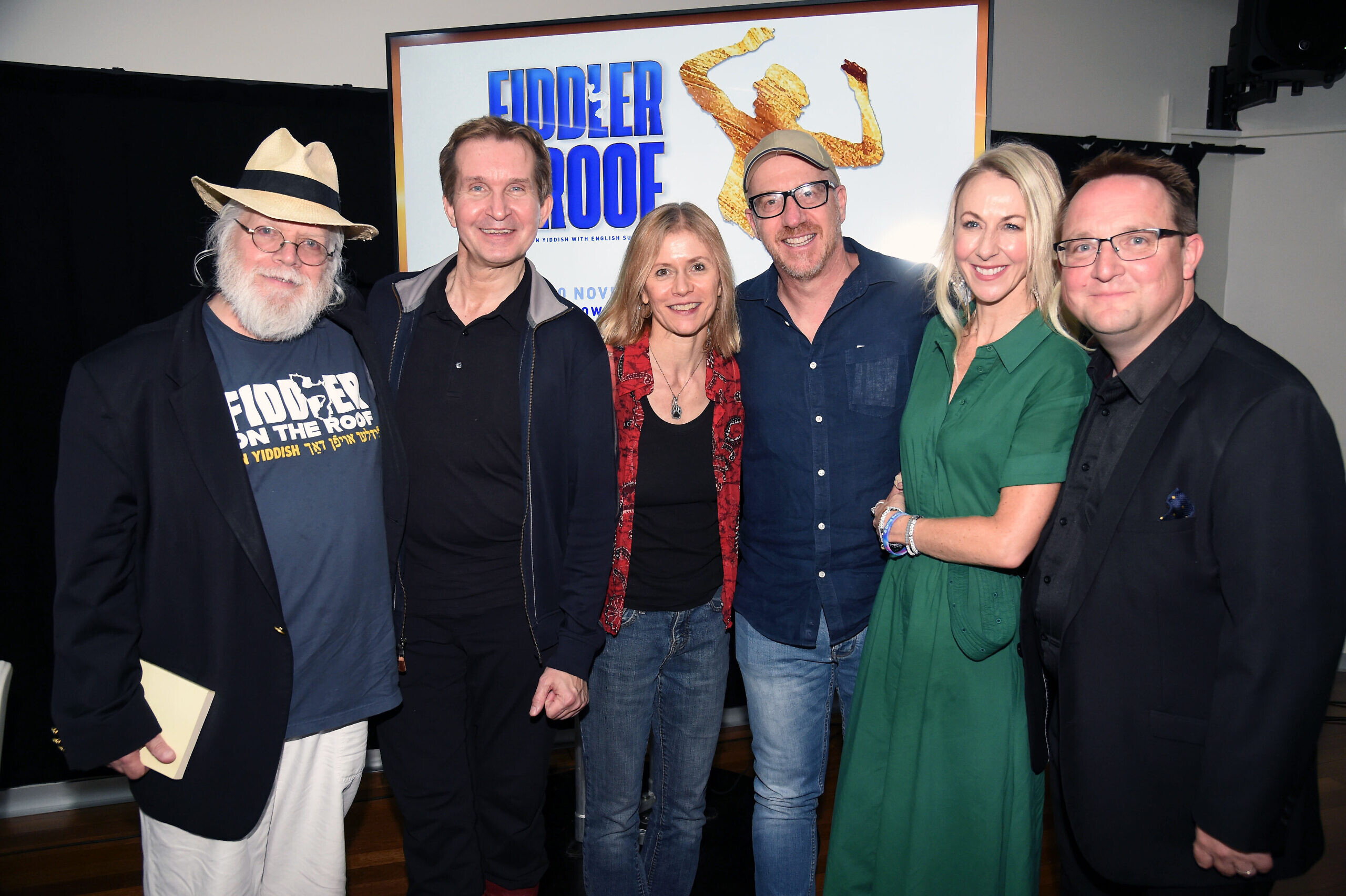 Assisting at auditions was resident director Pip Mushin, well known in Melbourne for his acting and directing, including serving as resident director of the hit musicals The Book of Mormon, Evita and the 2016 Australian production of Fiddler on the Roof.

On the first day of Melbourne auditions, media and members of the Jewish community were invited to meet the Fiddler on the Roof creative team, including director Grey on a Skype link from America where he was filming a TV show with John Lithgow and Jeff Bridges.

Grey explained that when he was originally offered the director’s job for the National Yiddish Theatre Folksbiene production, he explained that he didn’t speak Yiddish but nevertheless said ‘yes’.

“It has been one of the greatest joys of my life,” he added.

Grey said that when he first saw Fiddler on the Roof on stage 50 years ago in Washington DC, he fell in love with the show.

“I thought that I could play Tevye, but was too busy at the time. This time I chose to direct the show instead of playing Tevye.”

During auditions in Melbourne and Sydney the production team have been putting actors, singers and dancers – both Jewish and non-Jewish – through their paces, with the cast to be announced in coming months. 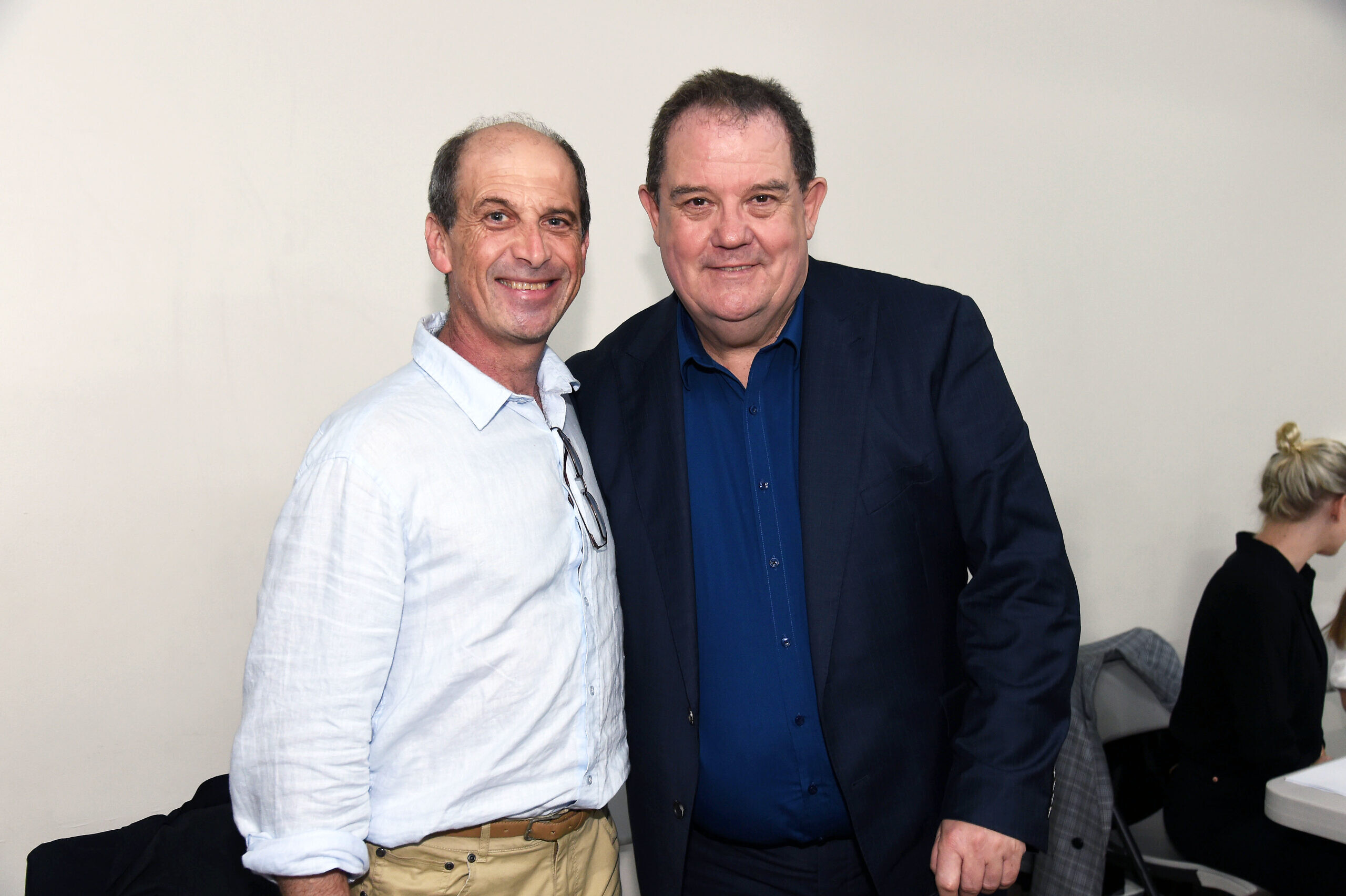 “Yiddish is a rich, beautiful and expressive language,” said Grey, who is confident the musical will resonate with music theatre fans in Australia.

Mlotek said the themes in Fiddler on the Roof are timeless and universal.

“They deal with family, separation and expulsion which are very relevant today,” he said. “The essence and honesty of Yiddish is there.”

Muenter said the Australian production would be performed on a bare stage with minimal sets, just like the New York production.

“The actors rely on their talents – there are no distractions to the story and the language,” she said.

“I’m so excited about the talent in Australia. Here we will have more rehearsal time and have Yiddish coaches available.”

Award-winning choreographer Kmiec, who will be in charge of musical staging and new choreography for Fiddler, was part of the cast for the American touring production that starred Theodore Bikel as Tevye and notched up 1682 performances.

“One of the great things about this production is that Joel Grey allowed me to explore it in different ways to Jerome Robbins (Fiddler‘s original director and choreographer),” said Kmiec. 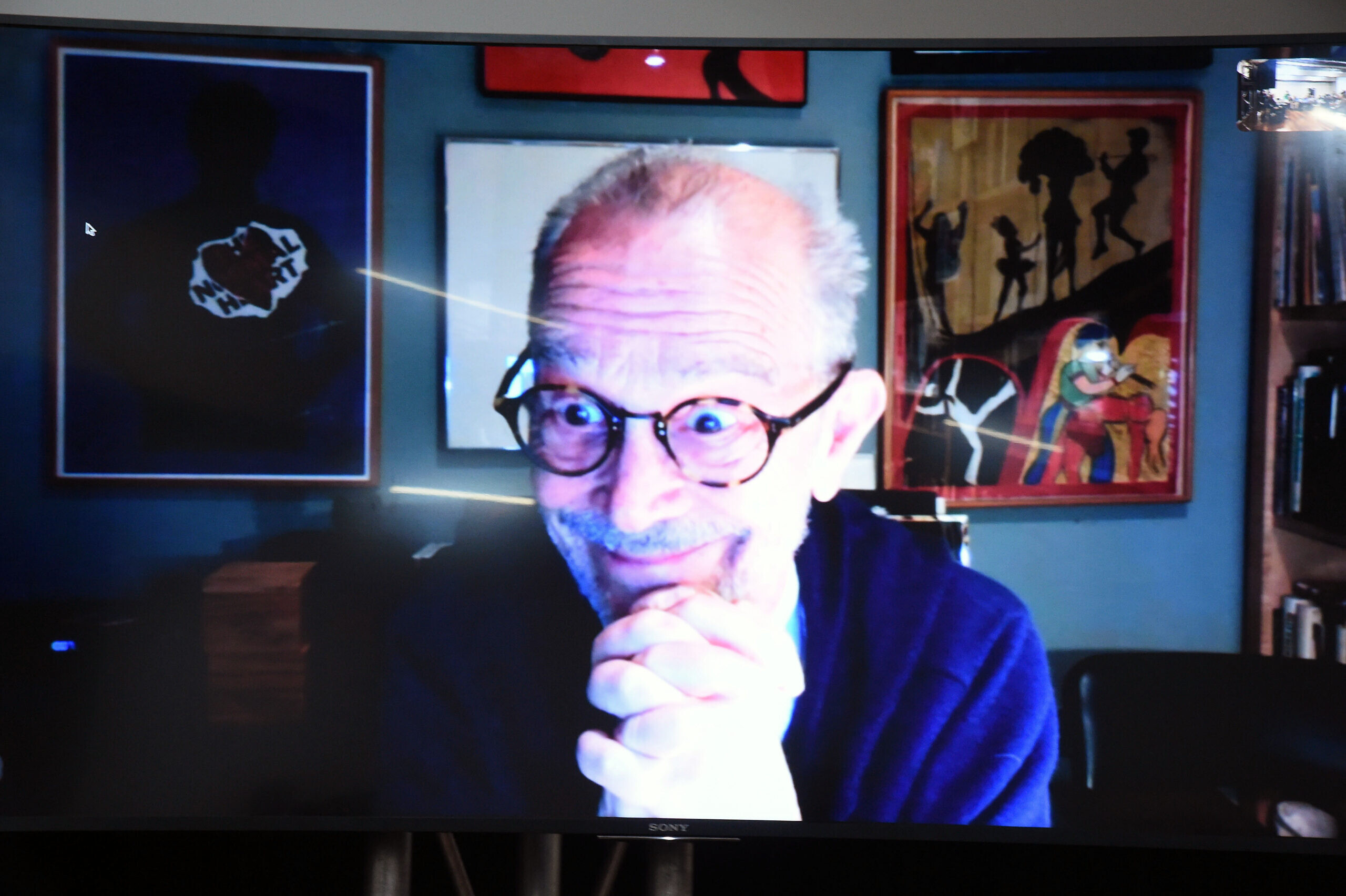 Director Joel Grey on a Skype hook-up for the Melbourne function to meet the creative team.

Muenter, who is not Jewish, grew up in Buffalo, New York with Scandinavian heritage.

“My father was part of the Danish resistance during World War II and I have always been attached to Jewish culture,” she said.

Muenter has worked as a choreographer on several productions for the the National Yiddish Theatre Folksbiene including The Golden Bridge, for which she received a Chita Rivera Award nomination for best choreography.

Frost, who has been producing major musicals for decades and won a Tony Award in 1996 for his Broadway production of The King and I, is producing A Fidler afn Dakh in association with New York producers Hal Luftig and Jana Robbins, who were involved with the National Yiddish Theatre Folksbiene production that won the 2018 Drama Desk Award for outstanding revival of a musical.

Fiddler on the Roof was performed in Yiddish in a one-night concert in Israel in 1965, featuring a translation by Shraga Friedman, which was used by the National Yiddish Theatre Folksbiene for its production.

A Fidler afn Dakh is at the Sydney Opera House from September 3 to October 31, and Melbourne’s Comedy Theatre from November 15 to December 20. Bookings: fiddlerontheroof.com.au.